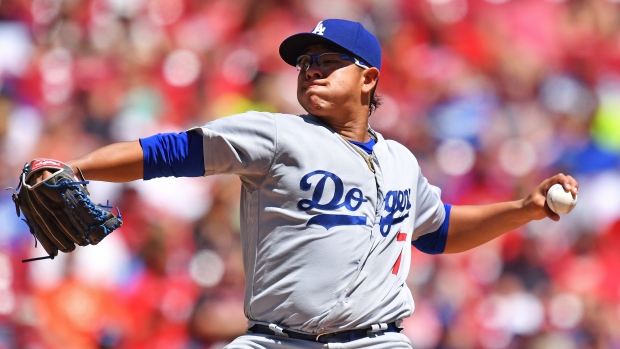 Urías was taken into custody Monday night in the parking lot of a shopping mall, Los Angeles police spokeswoman Norma Eisenman said. No details were released.

MLB subsequently placed the left-hander on administrative leave while it looks into his arrest. The leave was effective Tuesday and can last up to seven days. In previous MLB investigations, the length of the administrative leave has frequently been extended while the probe continues.

Dodgers manager Dave Roberts said before Los Angeles' game against the San Diego Padres that the team will let the process run its course and that they hope to know more information in the coming days. "Obviously it's not ideal in any sense of the word. It doesn't behoove me to make any further comments until I know more," Roberts said.

Roberts said he didn't know how long the investigation would last.

MLB and the players' association agreed to a domestic violence policy in 2015, giving the commissioner the right to investigate and impose discipline. If discipline is warranted, a paid leave can be converted to a suspension without pay. Players cited previously under the policy include José Reyes, Aroldis Chapman, Yasiel Puig, Héctor Olivera, Jeurys Familia, Steven Wright, Miguel Sanó and Addison Russell.

There was no immediate response Tuesday to an email sent to Urías' agent, Scott Boras.

The Dodgers said in an earlier statement that they learned Tuesday morning about what happened and had no immediate comment while they gathered information.

"Every allegation of domestic violence must be taken seriously and addressed promptly," the team said. "And we will co-operate fully with the authorities and Major League Baseball to ensure that that happens in this case."

Urías pitched three innings of scoreless relief for his second career save Friday night in the Dodgers' 5-0 victory over the Washington Nationals. He is 2-2 this season with two saves and a 3.18 ERA.

Urías began the season in the starting rotation but moved to the bullpen once Clayton Kershaw came off the injured list. He went 1-1 with a 3.66 ERA in four starts.

Roberts has said the team would like to limit Urías' workload with the hopes he could move back into the rotation either late this season or next year. He missed most of last year after undergoing left shoulder surgery in June 2017.

Urías — who is from Culiacan, Mexico — signed with the Dodgers as a 16-year old in 2012. The left-hander became just the second teenager since 2000 to make his major league debut in 2016 and the first for the Dodgers since Adrián Beltré in 1998.