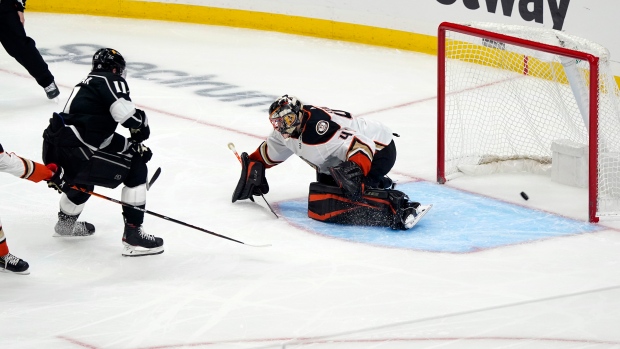 LOS ANGELES — Andreas Athanasiou and Blake Lizotte each had a goal and two assists and the Los Angeles Kings defeated the Anaheim Ducks 4-1 on Tuesday night.

Anze Kopitar and Carl Grundstrom also scored for the Kings, who had gone 14 games since their last win by at least three goals, against St. Louis on March 17. Cal Petersen made 24 saves.

“Had a bit of a rough stretch a little bit ago and we’re still within reach of a playoff spot we feel,” Lizotte said. “We believe that we can get there, so it’s playoff hockey this time of year and the intensity (will) just continue to ramp up. I think we just need to focus on our details of our game. When we take care of our details, we’re tough to beat.”

“It’s one of those tough games to evaluate,” Ducks coach Dallas Eakins said. “Overall, I thought we played a good game. We just didn’t score when we needed to, and they did.”

The teams played in front of about 1,500 fans, who were allowed into the Staples Center for the first time in more than a year due to the pandemic.

Lizotte made it 4-0 at 10:50 of the third, putting Athanasiou’s rebound into an open net. Playing in his 103rd career game, it was Lizotte’s first three-point game and first with multiple assists. He has six points (one goal, five assists) in his past seven games.

“He works probably harder than anyone on our team,” Kings defenceman Drew Doughty said. “When someone does that game in and game out, they deserve to be rewarded. And not that he hasn’t been creating chances in the other games, he has, but they’re finally going in for him and the hockey gods are finally on his side because he deserves all the points and stuff because he does all those other little things for us that a lot of other players don’t do.”

The Kings took the lead 5:26 into the first. Grundstrom was hit in the back by Athanasiou’s shot from the point, which sent the puck tumbling in past a bewildered Stolarz for his sixth goal.

Kopitar made it 2-0 at 8:31 of the second with his 10th goal. Doughty’s stretch pass set up the breakaway by Kopitar, who has reached double digits in scoring in each of his 15 seasons in the NHL.

Athanasiou buried a one-timer from the right circle to push the lead to 3-0 at 10:48. It was the third multi-point game for Athanasiou this season.

“I thought we were throwing the pucks to the net. Maybe we just need to get more bodies there,” Terry said.

The Kings had fans at Staples Center for the first time since March 11, 2020, with those in attendance after showing proof of vaccination or a negative test as a condition of entry.

“These last three months when we haven’t had fans, it’s a different atmosphere and a different play style and it’s just not as exciting, so I’m absolutely thrilled to have our fans back and providing energy for us. Seriously, it makes a huge difference and absolutely love having them back, so that was great tonight,” Lizotte said.

San Jose is set to follow suit starting next Monday, which will leave Chicago as the only NHL team in the United States that has yet to play in front of fans on home ice this season.

The Kings had reinforcements on defence with Matt Roy back after missing seven games because of COVID-19, and Tobias Bjornfot returning from an upper-body injury. With their second pair back, the Kings ended a run of 12 games allowing multiple goals.

Ducks defenceman Josh Manson and Kings forward Brendan Lemieux did not come out of their fight in the third period unscathed. A wobbly Manson went straight to the dressing room, while Lemieux departed with an apparent hand injury.

Had Anaheim won, Vegas would have become the first team in the league to qualify for the Stanley Cup playoffs.