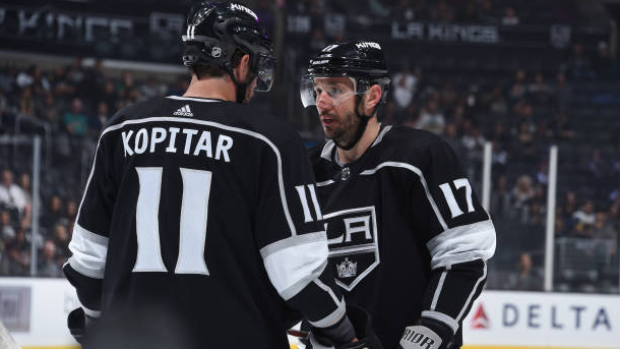 The Los Angeles Kings and Ilya Kovalchuk have made no firm decisions on the veteran's future, according to TSN Hockey Insider Pierre LeBrun.

LeBrun notes more discussions will take place between Kovalchuk's camp and the Kings, though his 35-and-over contract limits the options for both sides. Kovalchuk carries a $6.25 million cap hit through next season, though the final signing bonus in three-year contract is payable Dec. 15, at which point he'll only be collecting a salary of $700,000 for the remainder of this year. He is, however, still set to earn a $4.25 million salary next season with his $6.25 million cap hit counting against a team's cap whether or not he plays.

LeBrun added a trade is the "best-case scenario" but it's unclear if a market exists the the 36-year-old.

Kovalchuk spent Tuesday's game against the Minnesota Wild as a healthy scratch, with head coach Todd McLellan and general manager Rob Blake declining to commit on when the veteran would return to the lineup.

The Russian winger has one goal and two assists in his last 13 games for the last-place Kings after opening the season with two goals and six points in the team's first four games. Kings captain Anze Kopitar shed some light on the situation after Tuesday's 3-1 win over the Wild, saying "it’s not working on the ice" at the moment for Kovalchuk.

“First of all, it’s — how do you want to call it? — it’s not a great situation,” Kopitar said, per The Athletic. “Kovy is a good guy. There’s nothing that’s wrong with the attitude or anything. He wants to win. He wants to do the best. He’s a really good guy off the ice. Everybody can probably say that about him. It’s just, for whatever reason, it’s not working on the ice.”

Blake, who said the team's lineup for Thursday's game against the Detroit Red Wings had not been set, admitted that he met with Kovalchuk after the lineup was decided for Tuesday's game, but noted that is common practice for him.

“I usually do with people that are out of the lineup,” Blake said. “It’s hard taking players out, difficult decisions, difficult conversations. But yes I did.

“We’re in last place, right? We’ve changed a lot of lineups. We did with Tyler (Toffoli). Did it with (Nikolai) Prokhorkin. We did it with Adrian Kempe tonight … It happens.”

$6.25 million this year, including a $5.3 mil bonus. Next year, final year of contract is $6.25 mil. Find a trade after bonus payment, sit him or let him try and play his way back into the lineup. No decisions made...yet. https://t.co/OeX4FvSP9T

Kovalchuk had 16 goals and 34 points in 64 games last season, returning to the NHL after five years in Russia.