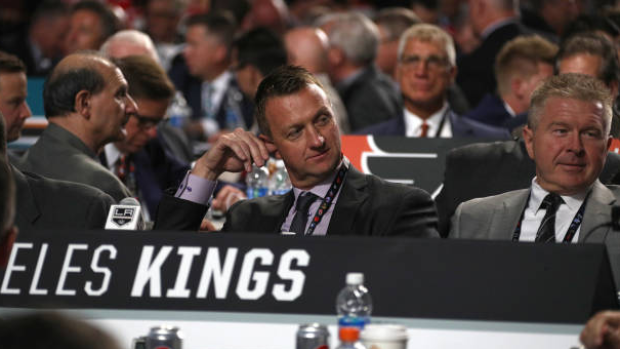 With his contract set to expire on June 30, the Los Angeles Kings and their general manager have agreed on a new three-year deal, reports TSN Hockey Insider Pierre LeBrun.

Hearing that GM Rob Blake has agreed to a three-year extension with the Kings. Likely won’t be officially announced for a week or two, but source confirms the deal is done. His current deal was expiring June 30. @TSNHockey @TheAthletic

LeBrun notes that the new is unlikely to be announced for the next week or two.

A Hockey Hall of Famer, the 52-year-old Blake has been in his current role since the spring of 2017.

Retiring in 2010 after a 20-year NHL career, Blake joined the Kings front office in 2013 as an assistant GM, winning the Stanley Cup in his first season. Along with serving as assistant GM to the Kings, Blake served as general manager for the team's AHL affiliates, first the Manchester Monarchs and then the Ontario Reign.

in 2014, Blake served as GM of Canada's entry at the IIHF World Hockey Championship in Belarus.

A native of Simcoe, Ont., Blake appeared in 1,270 career games for the Kings, Colorado Avalanche and San Jose Sharks.

A Norris Trophy winner in 1998 and an Olympic gold medal winner with Canada at Salt Lake 2002, Blake was inducted into the Hockey Hall of Fame in 2014.