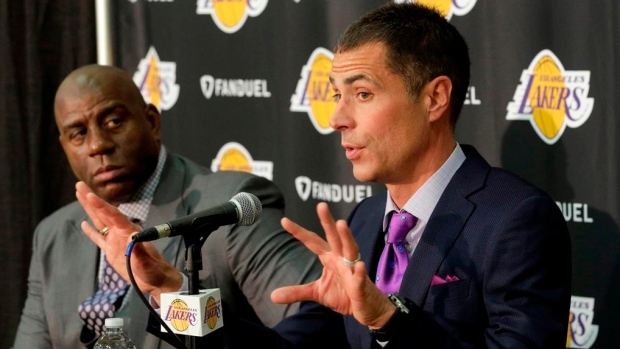 LOS ANGELES — Rob Pelinka was given the title of vice-president of basketball operations by the Los Angeles Lakers on Friday, almost three years after the former agent was hired as general manager.

The Lakers made the announcement before the team's game in Dallas.

Pelinka joined the Lakers in March 2017 and has overseen the free agent signing of LeBron James and the blockbuster trade this past off-season that brought in Anthony Davis.

The 50-year-old Pelinka took on a more significant role with Magic Johnson's surprising resignation as president basketball operations on the final day of the regular season last spring.

Pelinka had been an agent for almost 20 years when the Lakers hired him in the middle of a franchise-worst six-year run of missing the playoffs. With the best record in the Western Conference, LA is all but assured of ending that skid.

“I’m extremely pleased with the work Rob has done in order to put this franchise in a position for success,” owner Jeanie Buss said.

Pelinka was a member of Michigan's 1989 national championship team before getting his undergraduate and law degrees there.