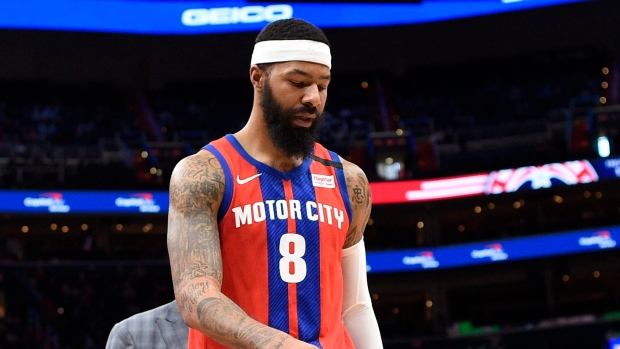 LOS ANGELES — Markieff Morris has signed with the Los Angeles Lakers for the post-season push.

The Lakers announced the deal Sunday to add the nine-year NBA veteran immediately after he cleared waivers.

Morris reached a buyout agreement with the Pistons on Friday. He averaged 11 points and 3.9 rebounds in 44 games with Detroit this season while hitting a career-best 39.7% of his 3-pointers and playing solid defence.

He is expected to provide rebounding and defence as the backup power forward for the Lakers, who lead the Western Conference at 43-12 after beating Boston 114-112 on Sunday for their fifth consecutive win.

The nine-year veteran has 24 games of playoff experience, all in the last three seasons with Washington and Oklahoma City. He began his career with Phoenix in 2011.

Markieff Morris' twin brother, Marcus, plays down the Staples Center hallway for the Los Angeles Clippers, who acquired him earlier in the month. Marcus Morris has said the brothers will probably live together in LA while their teams roll into the playoffs.

Cousins never played for Los Angeles after injuring his knee during the summer, one month after signing with the team. The Lakers signed Dwight Howard to replace him, and Howard has revitalized his career as an effective rotation player alongside starting centre JaVale McGee.

Cousins was with the Lakers before their game against Boston, and the four-time All-Star has been a popular locker room figure for his new team despite his inability to play. Coach Frank Vogel refused to comment on reports that Cousins will continue his rehabilitation in Los Angeles.