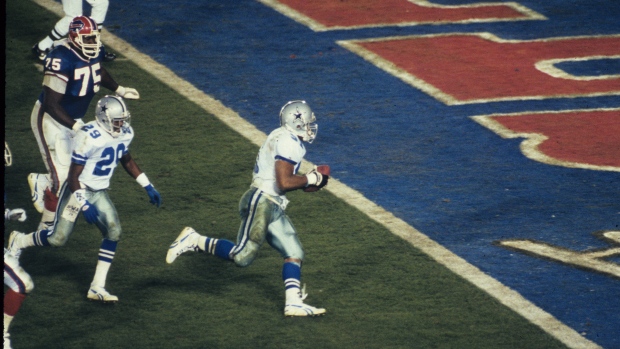 For the first time in almost three decades, the Super Bowl returns to Los Angeles when SoFi Stadium hosts one of the biggest sporting spectacles of the year on Feb. 13.

This will be the eighth time Los Angeles has hosted the NFL’s marquee Sunday event and despite the 29-year absence, the City of Angels has played a huge part in several Super Bowls over the years.

From the first-ever Super Bowl to the Buffalo Bills’ third consecutive Super Bowl loss, here is a look at the history of the Super Bowl in Los Angeles.

Los Angeles Memorial Coliseum was the site of the first-ever Super Bowl between the Green Bay Packers and the Kansas City Chiefs in front of 61,946 fans.

This was the only Super Bowl not to sell out and it was the lowest attended game until Super Bowl LV last February between the Tampa Bay Buccaneers and Kansas City Chiefs, which only had 24,835 attendees in Tampa, Fla., due to COVID-19 restrictions.

Starr was named the first Super Bowl MVP for his performance.

The Super Bowl returned to the Los Angeles Memorial Coliseum for its seventh edition as the Miami Dolphins took on Washington with 90,182 fans in attendance.

Dolphins running back Larry Csonka ran for 112 yards and quarterback Bob Griese threw for 88 yards and a touchdown as the Dolphins defeated Washington 14-7. With the win, the Dolphins became the first and only NFL team to complete a perfect 17-0 season, going 14-0 in the regular season and 3-0 in the playoffs.

The third Super Bowl played in the Los Angeles area was at the Rose Bowl in Pasadena. The Oakland Raiders, led by head coach John Madden, won their first-ever Super Bowl by defeating the Minnesota Vikings 32-14.

The Super Bowl returned to the Rose Bowl with the defending champion Pittsburgh Steelers taking on the Los Angeles Rams. While it wasn’t their home stadium, the Rams became the first team to play a Super Bowl in their home market.

The Rams were leading 13-10 going into halftime but the Steelers came back to beat the Rams 31-19 to win their fourth Super Bowl.

The Steelers victory happened in front of 103,985 fans, which is the all-time Super Bowl record.

After a shortened nine-game regular season and a revamped playoffs format due to a players’ strike, the Super Bowl returned to the Rose Bowl with Washington taking on the Miami Dolphins. The game was a rematch of Super Bowl VII which the Dolphins won 14-7.

Joe Theismann threw for 183 yards and two touchdowns as Washington defeated the Dolphins to win their second Super Bowl in front of 103,667 fans.

Super Bowl XXI saw the New York Giants take on the Denver Broncos in front of 101,063 fans at the Rose Bowl.

The Broncos held a slim 10-9 halftime lead, but the Giants scored 26 unanswered points and a record 30 second-half points to win their first Super Bowl 39-20.

This was the first of consecutive Super Bowl losses by the Broncos who would lose to Washington the following year.

Super Bowl XXVII was the last Super Bowl to take place in Los Angeles and it featured the Dallas Cowboys taking on the Buffalo Bills at the Rose Bowl with 98,374 in the stands.

With this game, the Bills became the second team in NFL history to play in three consecutive Super Bowls but also became the first to lose all three when Dallas defeated Buffalo 52-17. It was the Cowboys’ third championship in their history.

The Bills also reached the Super Bowl the following year but would lose to the Cowboys once again.