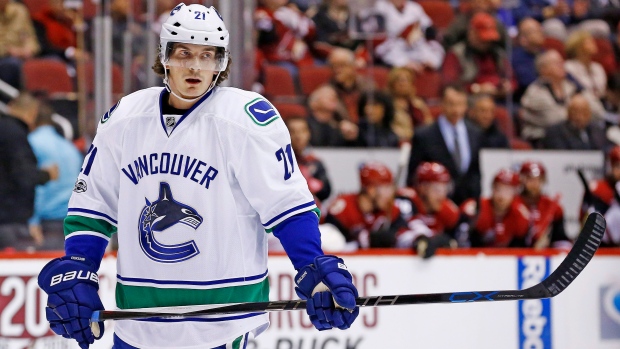 Loui Eriksson's agent, J.P. Barry, admitted Wednesday that the veteran's future with the Vancouver Canucks remains up in the air after a meeting with general manager Jim Benning last month.

Eriksson and Benning sat down to discuss comments Eriksson made earlier this off-season to a Swedish news outlet, in which he cited friction with head coach Travis Green as a reason for his diminished offensive output. Barry said the conversation also extended to what's next for the 33-year-old.

"Him and Jim have spoken about that and we have to go from here," Barry told TSN Radio 1040 Vancouver. "I mean, we have spoken about a lot of things whether it is staying and playing or finding a new home, so we will need to continue discussing that."

Eriksson, who carries a team-high $6 million cap hit, has scored a total of 31 goals in three seasons since joining the Canucks after scoring 30 with the Boston Bruins in 2015-16. He has spent the past two seasons under Green, and averaged just 14:04 of ice time last season – his lowest mark since the 2007-08 season with the Dallas Stars.

“The coach and I don’t really get on 100 per cent,” Eriksson told HockeySverige in May, as translated by the Vancouver Province. “It is difficult when I do not get the same trust that I received from all the other coaches I had during my career. Of course it is tough on that front.”

Barry said Wednesday that he believed Eriksson's comments were overblown, adding "maybe they weren't translating the Swedish that well." He admitted, however, that both sides have looked into trade options for the Swedish winger.

"It's gone past any kind of request," Barry said. "I think we're all just working together to look for a solution, really, is what we've been doing. It's not an easy thing. I think any kind of transaction would have to involve a player on another team in similar situation and we all know that, so we've all looked around the league and this could be the time of year... those changes could still happen over the next several weeks."

NHL agent J.P. Barry says Loui Eriksson has obviously been frustrated with how his time in Vancouver has gone because there has been flashes of what he can do but it’s not been sustained. J.P. says Eriksson understands that going to Utica could be a possibility because the NHL is a business, but J.P. doesn’t believe Utica wouldn’t make sense because Eriksson is an NHL player and a number of teams would like to have him if it weren’t for his contract.

Barry added that he doesn't believe the Canucks sending Eriksson to the AHL's Utica Comets would make sense for either side.

"Loui’s an NHL player," Barry said. "There's many, many teams that would like to have him [if] his cap number weren't what it is, right? So, we have to sit down and deal with that, but I don't think that really helps make a transaction going forward, either."

Eriksson was healthy for the full season for the first time since joining the Canucks this year, but sat out one game in March as a healthy scratch. He finished with 11 goals and 29 points in 81 games with a minus-11 rating.