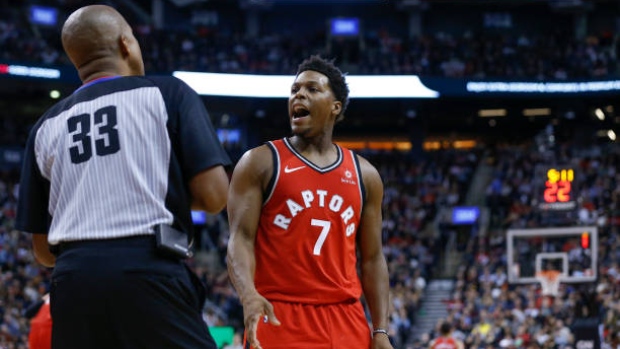 TORONTO — Raptors coach Nick Nurse might not have had a good look at Reggie Bullock's buzzer-beater.

But moments after Toronto's 106-104 loss to Dwane Casey and the Detroit Pistons, Kyle Lowry had already begun his post-mortem.

The Raptors point guard was particularly angry about the game's final play, when a defensive miscue allowed Bullock a running layup.

"On the last possession you've gotta communicate," Lowry said. "We have to open our mouth and say 'switch.' We have to talk. Simple as that."

Nurse said he'd have to go over video of the play.

"I didn't get a great look at it during the game, either," said Toronto's rookie head coach.

Lowry had predicted it would be strange seeing former coach Casey at the opposite end of the floor. And the emotional night lived up to its billing. Lowry and Casey embraced before tipoff, and during a stirring video tribute to the coach who was fired days after last season's playoff run, Lowry walked to halfcourt to applaud.

Lowry was asked about appearing angry in the team's final time out, but he quickly dismissed the question.

"I don't what you're talking about, honestly," he shot back.

The Raptors now depart for four games on the road, beginning in Boston on Friday.