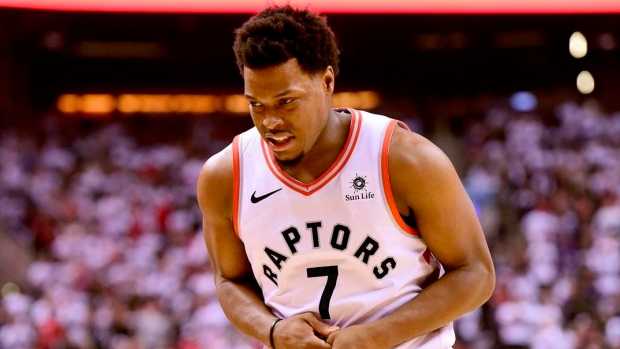 The blue glove resembled an oven mitt, but with the fingertips exposed.

"I'm learning how to cook so it comes in handy," Lowry told a couple dozen reporters at the team's morning shootaround ahead of Wednesday's Game 1 of the Eastern Conference final.

A sprained thumb is obviously no laughing matter. It was the same injury that hindered former Raptor DeMar DeRozan — remember the red shoelace? — in the 2016 playoffs.

Lowry said his left thumb "popped out" when he fell during the Raptors' thrilling Game 7 win Sunday over Philadelphia that launched Toronto into its second Eastern Conference final in franchise history.

Despite a couple of days of rest, Lowry still isn't 100 per cent.

"It's fine, it's whatever. Just trying to keep some circulation, I'm fine," he said, before shaking the compression glove off.

"There you go. I'm good. Just trying to do some treatment on it, work on it, just getting it better."

Lowry, who missed about three minutes of Sunday's game when he ran to the locker room to have his sprained thumb taped, said he hadn't done "much passing or gripping of the basketball" in the two days between games.

"It's why we have shootaround," the all-star guard said. "Mind over matter on some things and we'll tape it up and get it ready to go."

The 34-year-old's shooting is down over previous post-seasons — he's connecting on just 28 per cent of his three-point shots, compared to 44 per cent last season. But he's made up for it in other areas.

He's recorded assists on 33.5 per cent of his possessions, the second-highest rate among players that have averaged at least 15 minutes in eight or more playoff games. Lowry ranks third in the playoffs in total deflections (37) and first in total charges drawn (10).

Alex McKechnie, the Raptors' director of sports science, would wrap DeRozan's thumb tightly in a red shoelace when the former Raptor was on the bench to facilitate drainage and mobilization. DeRozan called it the "thousand-dollar shoelace." Fans posted on social media of thumbs rapped in red in solidarity with DeRozan. Even SportChek got in on the action, promoting the sales of red shoelaces, or what the store called "rally wraps."

Sunday wasn't the first time Lowry dislocated a digit during these playoffs. He dislocated his ring finger on his right hand when he jammed it deflecting a ball during the Raptors' victory over the Orlando Magic in Game 5 of their first-round series. He popped it in and played on.

Lowry finished Game 7 with 10 points on 4-of-13 shooting, to go along with six rebounds, six assists, two steals, and two turnovers.

"It popped out, but it's fine," Lowry said at the post-game press conference."I popped it back in."

In 2017, Lowry had surgery to remove loose bodies in his right wrist, missing 21 before returning for the final two games of the regular-season. The Raptors beat the Bucks in the opening round that year, then were swept 4-0 by Cleveland in the conference semifinals.

Game 2 of this series is Friday in Milwaukee, then the series heads to Toronto for Game 3 on Sunday.