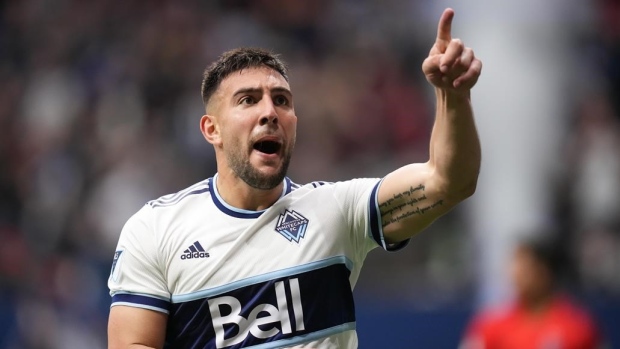 And with a goal and two assists in his last two Major League Soccer games, Lucas Cavallini is finding his form at the perfect time.

“I think that finally this is the real Lucas. This is the real (designated player) that we signed, a guy that he fights every ball, he helps us in build up," Sartini, the club's head coach, said Tuesday.

"He never changed his attitude even in the dark moment last year. And this year, he’s in a good shape and a good moment physically. He can give us what he's able to and he's helping us a lot.”

Cavallini, a 29-year-old striker from Toronto, started his career in Uruguay and played in Mexico before signing with Vancouver in December 2019.

He led the 'Caps in scoring with six goals in 2020 but struggled with injuries last season, contributing three goals and an assist in 21 appearances.

Nicknamed "El Tanque," the five-foot-11, 190-pound forward got healthy over the off-season and came into the 2022 campaign with renewed energy.

"I knew at the beginning of the year it was gonna be a good year for me and I just had to stick to that positivity and get that confidence back, which I have been," Cavallini said. "And now, just all these games, it's been helping me gain more and more confidence in myself.”

His success comes during a schedule crunch for the 'Caps (2-6-2), who'll play their fourth game in 11 days on Wednesday when they host high-flying FC Dallas (6-1-4).

“I honestly love it. It's great. I mean, this is what we love to do — play games. Less training more games," he said. "We've got to be smart, intelligent and take care of the body and rest well and be ready for the next game.”

Wednesday's matchup will conclude a four-game homestand for the Whitecaps, who've gone 2-1-0 across all competitions during the stretch.

While Vancouver has been good to the 'Caps this season, with the team going 2-1-2 at home, taking on Dallas won't be an easy task.

The Toros sit second in the Western Conference with 22 points and a plus-11 goal differential while the Whitecaps linger at the bottom of the standings with eight points.

Dallas' Jesus Ferreira leads the league with nine goals on the season, including the two he scored in a 3-1 victory over the L.A. Galaxy on Saturday.

“I think we need to defend as a collective unit. From my perspective, it's organizing what's in front of me, talking to the guys in front of me," he said. “We are a very good team. And we have very good players. We just need to continue to put those pieces together.”

The last few weeks have been "a whirlwind" for Cropper.

The 29-year-old American was pressed into action in Vancouver's 1-0 win over Toronto FC on May 8 after starter Thomas Hasal suffered an injury to his left hand.

“It's been an incredible feeling to be back out on the field," said Cropper, who signed with the 'Caps in March. "Obviously it's not how you want your opportunity to come but unfortunately it's part of the game.”

The veteran 'keeper has made six saves in three appearances for the Whitecaps this season and registered a clean sheet in Vancouver's 2-0 win over Valour FC in Canadian Championship action on May 11.

While the team has recently found a way to eek out results, the 'Caps have often played from behind. Vancouver's last eight goals — including three from Saturday's 3-3 draw with the San Jose Earthquakes — have come in the second half.

Sartini wants to see his group get into the action earlier on Wednesday.

“I always say that we have a chance to go playoffs if we are the Whitecaps for 90 minutes, not for 45, 30 or 50 minutes," the coach said. "And we need to have a good start and good finish."

COMING UP: After an extended homestand, the 'Caps will hit the road for a three-game road swing starting Sunday in North Carolina when they play their first-ever game against expansion side Charlotte FC.