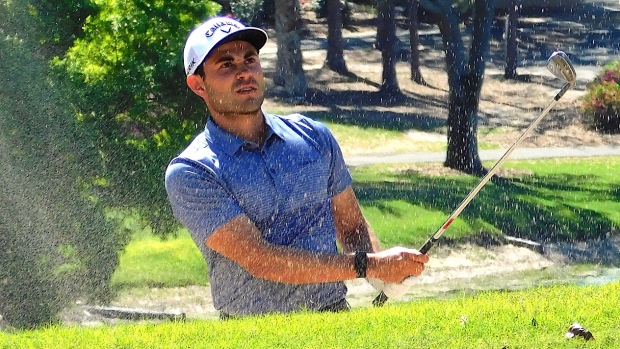 HOWEY-IN-THE-HILLS, Florida—Luis Gagne and amateur Zack Taylor will take a share of the lead into the final round of the Mackenzie Tour – PGA TOUR Canada Qualifying Tournament on Friday, and Cristian DiMarco, a stroke back, will join that grouping with Mackenzie Tour membership at stake. Jake Scott, a Cleveland-area teaching pro, who is giving competitive golf another go, two shots behind.

Gagne shot a 2-under 70 at Mission Inn Club and Resort’s El Campeon Course, while Taylor, a graduate of Coastal Carolina and is still enrolled in classes to maintain his college eligibility, fired the round of the tournament, a 6-under 66, to move into the tie. After his round, Taylor said, “I’m really trying to enjoy the moment and not get ahead of myself.”

Making six birdies and no bogeys has a way of putting a smile on anybody’s face. “Rounds when you play good—rounds like this—is a 10 all the time. This is the dream,” he added

Taylor made his first birdie of the day on his opening hole, the par-5 10th, and added birdies on the 14th and 18th to make the turn at 3-under. He then chipped in for birdie on his 12th, No. 3. “That was pretty simple, 30 or 40 feet straight up the hill. I had the grain going with me. I felt pretty good about that one,” said Taylor, winner of one college tournament, the 2020 General Hackler Championship in Myrtle Beach, South Carolina.

This week, Gagne has held a share of the lead through each of the first three rounds, making only five bogeys in his 54 holes. He’s done considerable damage on the El Campeon’s four par-5s, making two birdies and an eagle on No. 10 and birdieing No. 14 all three days. He is a cumulative 7-under on the par-5s.

“I feel good. My game feels solid, and I’m playing focused out there, which is the main key on this course,” said Gagne of his four-birdie, two bogey day that.

DiMarco, alone in third after his second consecutive 2-under 70, had a disappointing bogey on No. 12 with a three-putt, but he bounced right back, nearly holing his approach shot on the par-4 13th from 84 yards. It rolled back to about 12 feet.

“I don’t know how it missed the pin, but it did,” DiMarco said after examining his ball mark and the ball’s finishing position. He followed the birdie at the 13th with another a hole later.

The Gagne-Taylor-DiMarco group will tee off Friday at 12:30 p.m.