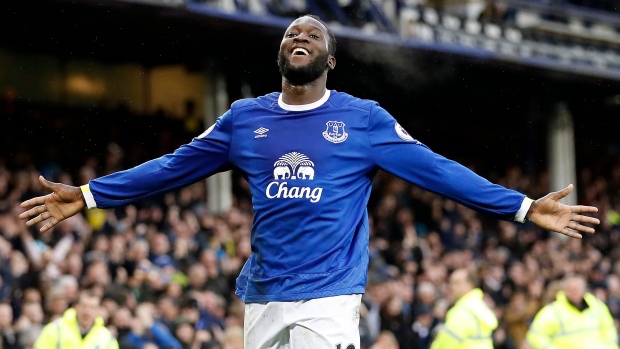 LIVERPOOL, England — Romelu Lukaku has cast doubt on his future at Everton but he's continuing to score the goals that could secure his team a place in Europe.

The striker set up a goal and scored twice in stoppage time to wrap up a 4-0 victory over 10-man Hull on Saturday at the end of a week when Lukaku revealed he would not be signing a new contract with the Merseyside club. Lukaku is the first Everton player to score 21 league goals in a season since Gary Lineker in 1985-1986.

Europa League-chasing Everton moved level on points with fifth-placed Arsenal but behind on goal difference having played two games more than the London club.

Everton went in front with a first goal from 20-year-old Dominic Calvert-Lewin nine minutes into his sixth Premier League appearance.

Relegation-threatened Hull began to gain the upper hand, but the momentum was halted when Tom Huddlestone was sent off for a shin-high challenge on Idrissa Gana Gueye in the 73rd minute.

Everton took control when Enner Valencia scored within a minute of coming off the bench after being set up by Lukaku's lobbed assist.

Valencia returned the favour, with a through-ball for Lukaku in the first minute of stoppage time. Lukaku still found time to find the net again by exploiting a defensive mix-up.