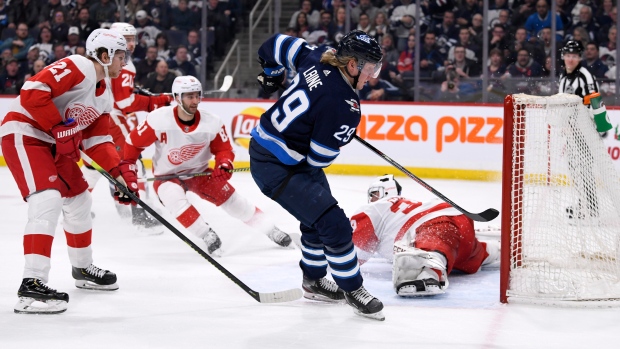 The Detroit Red Wings suffered their 12th consecutive defeat on Tuesday, falling 5-1 to the Winnipeg Jets and extending their pointless streak to 10 games.

"We can't seem to stop the bleeding once it starts," forward Luke Glendening told NHL.com after the loss. "We have a tough time slowing it down. I think they scored basically three shifts in a row. Part of that is, we get stuck in our own zone and we're too tired to get it out."

The Red Wings were tied 1-1 with the Jets at the midway point of the second period before Winnipeg exploded for three goals in a two-minute span, including two goals within 11 seconds of each other with less than 90 seconds left in the frame.

Detroit's last win came on Nov. 12, a 4-3 overtime win over the Anaheim Ducks to extend their season-long win streak to three games. The team picked up a point in each of their next games, but have failed to do so since.

"Right now, we got to find a way to win a hockey game," Red Wings coach Jeff Blashill said. "We've got to get some confidence and moxie back into us. We're not a good enough team right now. The only people that can change that is us."

Despite the team posting another loss, forward Dylan Larkin said post-game he sees no quit in the Red Wings despite their league-worst 7-22-3 record.

"As hard as it is to say after a 5-1 loss, we're tapping in a lot, we battle, we battle for each other. We show up every day and practise hard. I've said it before; I do feel we've gotten stronger as a group although the results aren't showing it."

The Red Wings will face the Jets again on Thursday night in Detroit.