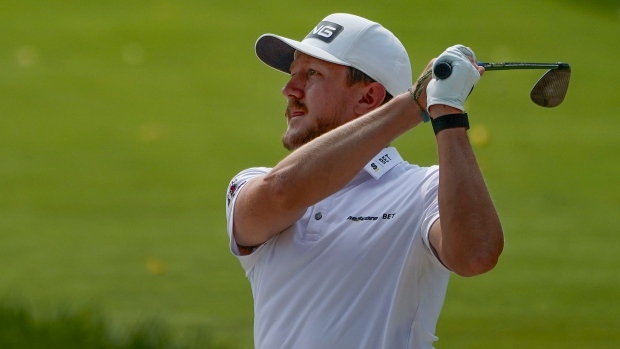 Mac Hughes didn’t get the big one he wanted at the U.S. Open, but he did leave Torrey Pines with a pretty solid consolation prize.

Sunday was the final day of qualifying for Canada’s two spots in the men’s Olympic golf competition and Hughes grabbed one. He’ll be joined by his college teammate from Kent State, Corey Conners, in Tokyo.

Golf Canada will nominate the two golfers to the Canadian Olympic Committee, a mere formality.

“I knew I had that in my back pocket the whole day and I knew [Monday] was the announcement of that,” said Hughes after slipping to 15th at the American championship after a disappointing final round. “I’m really excited for that and I’m sure once the dust settles on [Sunday] and I look back on that and I look back on the last year and a half, I’ll be proud of what I accomplished.”

The Dundas, Ont., product went into the U.S. Open having missed the cut in five consecutive tournaments. While he held a solid lead in the standings over Adam Hadwin for the final spot on the team, it wasn’t locked up.

Hughes played brilliantly and shared top spot on the leaderboard after three rounds before slipping to a 77 on Sunday. It was still good enough to hold off Hadwin who would have needed a top-three finish and a mediocre finish from Hughes to make the Canadian squad.

The final standings were somewhat bittersweet for Hadwin. Had the Olympics been held on their original dates a year ago, he would have gone to Tokyo with Conners. But his play over the past 12 months dropped him behind Hughes.

“Obviously it would have been an amazing opportunity to be there and compete for Canada,” reflected Hadwin. “It is what it is. If I had played better golf I could have played my way on the team again. The other guys played better.”

Hadwin said he will be a full-throated cheerleader for the Canadian duo. He’ll remain at home in the U.S. and concentrate on improving his standings on the FedEx Cup where he sits 105th. The top 125 will advance to the playoffs.

For Conners, being an Olympian is the fulfillment of a goal he thought about when golf returned to the Games in 2016 after 104 years.

“It’s been on my mind for the last year really,” said Conners, “but more frequently coming down the stretch and being in a good position to qualify for the team.

“It will be really exciting to play in the Olympics, a dream come true and a unique experience that I never thought as a kid that I would get. It will be a lot of fun and something I’m very much looking forward to. I’m starting to get some info on what it’s going to be like, and so as it gets closer I’m really excited about it.”

Conners and Hughes will be joined by their respective caddies, Danny Sahl and Jace Walker, along with national team coach Derek Ingram. Ingram has already made a scouting trip to the course before the COVID-19 pandemic.

The Canadians will be in tough against a strong international field. Justin Thomas, Collin Morikawa, Xander Schauffele and Bryson DeChambeau will represent the United States, which earned four entries into the field by having that number of players inside the top 10 on the standings.

Schauffele has not yet confirmed if he will participate. The top American, Dustin Johnson, withdrew from consideration, saying his schedule would be too taxing if he were to add the Olympics.

Others who will not participate include Sergio Garcia of Spain, Australia’s Adam Scott and Tyrrell Hatton of Great Britain.

Newly crowned U.S. Open champ Jon Rahm will be in Tokyo as will Rory McIlroy and Masters champ and home-country favourite Hideki Matsuyama.

Play will be conducted over the East Course at the Kasumigaseki Country Club, a private facility in Saitama. The layout was designed by American architect Tom Fazio.

The women’s teams will be announced on Monday with Canadians Brooke Henderson and Alena Sharp having locked up spots. Both played for Canada at the 2016 competition.