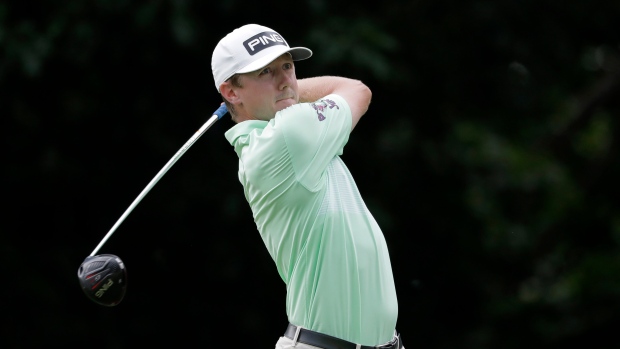 The start was good and the ending wasn’t bad either. But the middle? That was a bit less appealing. Still, it was a solid week for Mackenzie Hughes who ended the Travelers Championship in a tie for third.

Hughes, who opened the tournament with a stellar round of 60 on Thursday, dropped bombs from 47 and 43 feet on the final two holes on Sunday to finish up at 17 under par, two shots back of winner Dustin Johnson.

"Those last two holes were a huge bonus," Hughes said in his post-round press conference. "The weekend was pretty frustrating for me. I felt like I was playing well enough to shoot some better scores, and just wasn't quite happening for me."

Hughes was plagued by a balky putter through Saturday and Sunday, hitting numerous shots inside 15 feet but unable to capitalize on his fine iron play.

Sunday appeared to be more of the same as he missed opportunities on the fourth, seventh and eighth greens from eight, 12 and nine feet, respectively. The frustration showed on his face but just before a one-hour lightning delay, Hughes finally made one, an eight-footer on the 15th hole that brought a smile to his face.

When play resumed, the Dundas, Ont., product found a finishing kick, dropping the lengthy putts over the final two holes. Both were punctuated by fist pumps from Hughes seen by almost no one at the fan-less tournament.

"That was definitely weird," Hughes stated. "Like I hit the putt on 17, and I mean, that was a putt that would just make people erupt, the way it was a pretty dramatic putt."

The finish is the second top-five for the 29-year-old who was runner-up at the Honda Classic in his last tournament prior to the pandemic pause. Both results, although separated by almost four months, give Hughes a much-needed boost of confidence. He started his season missing the cut in nine of his first 11 tournaments and admitted the doubts crept into his mind. But now he feels reassured that his game is heading in the right direction.

"Obviously starting the way I did, it would have been nice to carry that forward and win this week," he said. "But my game is showing some good signs, and proud of the way I played this week.

Hughes was scheduled to play the Rocket Mortgage Classic in Detroit, next week but will skip that and likely play the back-to-back stops at Muirfield Village Golf Course in Dublin, Ohio.

He was projected to move into the 98th spot on the Official World Golf Ranking, joining Corey Conners and Adam Hadwin as Canadians inside the top 100.

Hughes also improved his chances of getting a spot in the year’s first major, the PGA Championship, which is scheduled for Aug. 6-9. The top 70 on a points list kept by the PGA of America earn spots and Hughes sits 60th after his play this week. The list will be finalized July 26.