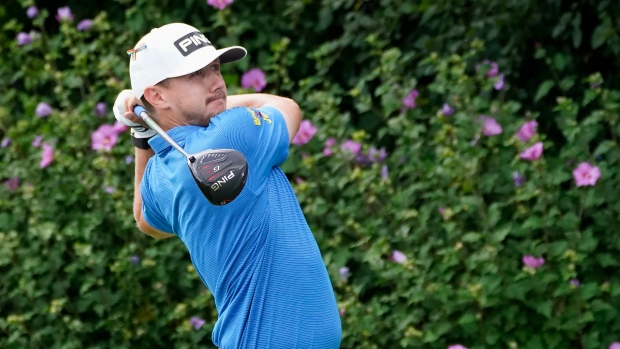 Mackenzie Hughes wants everyone to know that despite what appeared on social media, he is not about to challenge Bryson DeChambeau in a long drive contest any time soon.

A PGA Tour video released on Twitter this week showed Hughes hitting three shots on the 18th tee at the Plantation Course in Kapalua, Hawaii, where he is preparing for the year’s first event, the Sentry Tournament of Champions.

After each swing, DeChambeau looked on and offered a few tips and the captioning of the conversation reported that Hughes’ ball speed was measured in the low 190s, a massive increase from his usual numbers.

Alas, something was lost in the transcription.

“That audio translation was bad,” chuckled Hughes of the vignette. “I’m not anywhere near that.”

Not yet anyway. As the top-ranked Canadian gets set to start a new year, he admitted that he has spent time in the weight room, trying to add some muscle which might lead to extra distance. It’s part of his overall push to improve his game after a year of successes that led to plenty of rewards he’ll reap as the season unfolds.

The first of those is a spot in the field this week. As its name suggests, this championship is usually reserved for winners of PGA Tour events from the previous year, but with 11 tournaments cancelled due to COVID, the field was expanded to include players who finished inside the top 30 on the FedEx Cup standings.

Hughes ended the year in 14th spot. Nick Taylor, who won the AT&T Pebble Beach Pro-am in February, is also in the field.

Hughes admitted that his game is not yet at 100 per cent and that this week is also part celebration as he has friends and family with him in Hawaii.

“I’d say it’s about 60 per cent work and 40 per cent enjoyment,” he said. “I haven’t seen my family since Christmas 2019 so it’s nice to be able to get together. But I also know this is a big tournament to play in and I want to play well.”

Hughes’ immediate family grew by one in November with the birth of a second son and in December, he spent more time changing diapers than hitting golf balls. However he is still feeling good the state of his game.

Much of that is a result of shots with his wedges and putter. He ended the 2019-2020 season ranked sixth in Strokes Gained: Around the Green and eighth in Strokes Gained: Putting. It was his putter that really shined. He made just 24 three-putts out of the 1,260 holes he played, and his longest putt made was a monstrous 67 feet, that one coming in the final round at the Memorial.

“I would consider that part of my game to be my strength,” he said. “It’s my bread and butter. If I can clean up the rest, I’ll be in a really good spot.”

The improvements will include the aforementioned hunt for more distance and accuracy into the greens. He will continue to work with coach Ralph Bauer but most of that training will switch to a virtual format. Bauer signed on as the teaching professional at Hamilton Golf & Country Club and won’t spend as much time out on tour. It will be an adjustment period for both teacher and student.

Hughes, who started 2020 ranked 246th in the Official World Golf Ranking and is currently 49th, has his 2021 schedule about 90 per cent finalized. It will include his second trip to the Masters in April. However changes in exemptions due to COVID mean Hughes isn’t exempt for any of the other three majors just yet.

He does have one other date circled on his calendar. That’s for the Olympics in Japan where he hopes to be one of two golfers representing Canada.

“Tokyo is my No. 1 goal,” said the 30-year-old. “I know all the Canadians are trying to make that team so it’s going to be tough but it’s definitely my top goal.”

Hughes will get underway at the Sentry Tournament of Champions at 11:40 am local time Thursday.