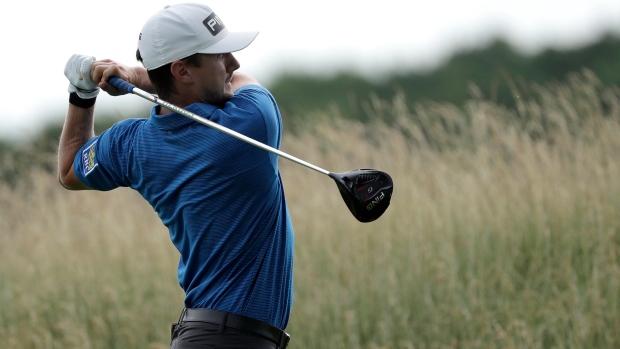 Mackenzie Hughes posted an under-par round on Saturday at the Travelers Championship, but it wasn’t enough under par for his liking.

On a day when there was a gaggle of low scores including, for the first time in PGA Tour history, two rounds of 61, Hughes’s game seemed stuck in neutral.

"I felt like I actually played quite nice and hit lots of great shots," said Hughes. "Just wasn't quite able to score."

Hughes’s round of two-under 68 gave him a three-round total of 14 under par, four shots behind leader Brendon Todd and alone in fourth place. But it was a day when he could have been much better.

While he was solid tee to green on most holes, his putter, which was so hot during his opening-round 60, was troublesome on Saturday. He did roll in some good par-savers, but he missed five birdie putts between eight and 16 feet.

He also had a few unforced errors, such as on the 15th hole where his tee shot on the short par-4 landed just 37 feet from the front edge of the green. But instead of knocking it close, he scooted his wedge across the putting surface leaving him a 37-footer for birdie.

Hughes was playing alongside Phil Mickelson and Will Gordon, who both shot one-over 71. Those were two of just three over-par rounds of the top 38 names on the leaderboard.

Hughes’s frustration could be seen on his face as hole after hole he came close but not quite close enough to kick-starting his round. Adding to that was seeing Todd and Dustin Johnson, both of whom shot 61, pulling ahead on the leaderboard.

"I definitely felt like on the back nine those guys were kind of starting to pull away," said Hughes, who has made only two bogeys in 54 holes, "and I was just trying to make that one putt that would get me going."

That putt never arrived as the Dundas, Ont., product made nine consecutive pars on the backside at TPC River Highlands.

Hughes doesn’t expect the scoring to let up on Sunday. With rain in the forecast that will soften up the course, it will be a shootout. He’ll need to chase down players such as Todd, who has two wins so far this season, and Johnson, who has 20 tour titles to his credit. The key for him, he said, is to remain aggressive and try to make a bunch of birdies.

"Tomorrow I'll need to be pretty sharp and post a low score," Hughes said. "But it's nice to play Sunday with a chance."

Hughes will play in the penultimate group alongside Kevin Streelman, and look for his second PGA Tour title.