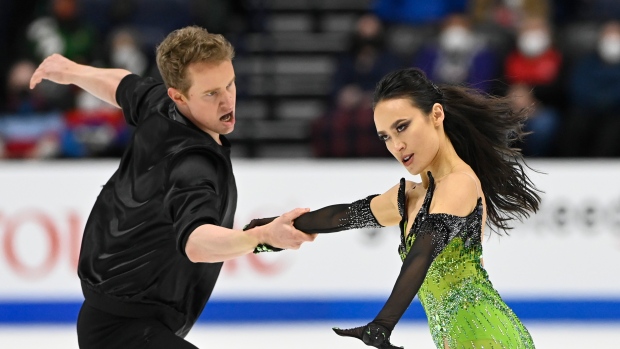 NASHVILLE, Tenn. (AP) — Madison Chock and Evan Bates crashed through the smallest of openings created by training partners and friendly rivals Madison Hubbell and Zachary Donohue to win the rhythm dance at the U.S. Figure Skating Championships on Friday.

Dancing to a medley of Billie Eilish songs, Chock and Bates were perfection on their curve lift, tightly in unison on their brilliant twizzles and brought down the house with their finishing step sequence to score 91.94 points — the highest score ever at nationals and more than two points higher than any posted during the Grand Prix season.

Hubbell and Donohue finished with 89.39 points to keep them within striking distance heading into Saturday's free dance, which not only will decide the national title but also help with selecting the three-team squad for the Winter Olympics.

“It is certainly not our first rodeo, but it's our favorite rodeo. We love doing the U.S. championships,” Chock said. “It was just such a pleasure to perform. I loved every second of it.”

The race for gold will be just as tight as the race for bronze and the final Olympic spot. Caroline Green and Michael Parsons have 80.85 points and Kaitlin Hawayak and Jean-Luc Baker are only a point behind them in fourth place.

The women's free skate takes place later Friday, but it was thrown into a bit of chaos even before the dancers took the ice at Bridgestone Arena on Friday when two-time champion Alysa Liu withdrew because of a positive COVID-19 test.

Liu joined the favored pairs team of Alexa Knierim and Brandon Frazier in withdrawing due to a positive test. Now, the 16-year-old Liu and the team of Knierim and Frazier will have to petition for their spot at the Beijing Games.

“That's the concern for all the athletes,” said Baker. “I'm sure a lot of us are dealing with a lot of adrenaline and excitement this week with it being an Olympic opportunity. But we've been dealing with this for two years, right?”

Hubbell and Donohue weren't taking any chances. They were the only skaters that wore their N95 masks during the brief warmup for their group, and they were quick to put them back on once they exited the ice.

The few minutes in between? Well, they delivered another strong performance to kick off their final nationals.

Dancing to a Janet Jackson mashup of “Nasty” and “Rhythm Nation,” they showcased their natural chemistry and style while overcoming a few minor bobbles — Hubbell at one point nearly lost her balance — to leave the crowd breathless.

Their dazzling stationary lift, which they've been working hard on all season, came off without a hitch. Their midline step sequence was in perfect unison. Their sequential twizzles were so close together that they were nearly touching.

Just about what you'd expect from a dance team out for retribution. Hubbell and Donohue were on their way to a medal at the Pyeongchang Game four years ago when mistakes in their free dance left them in fourth place.

“This program and this music, it really comes alive when there's a crowd,” Hubbell said. “It was a bit of a tough performance today. Not exactly what we had in mind. But looking at the people standing up for us, giving us the love they normally do — that was really heartwarming for us.”