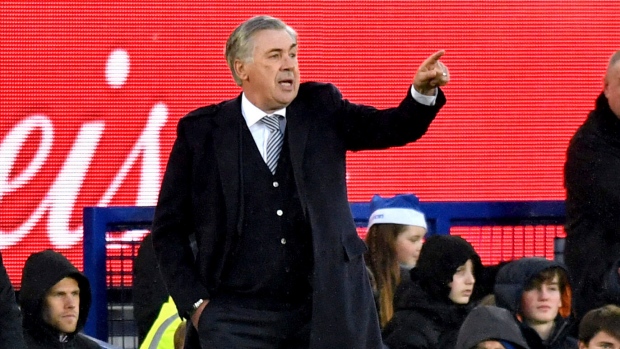 MADRID (AP) — Real Madrid will likely be without coach Carlo Ancelotti for the first leg of the Champions League quarterfinals against Chelsea because of COVID-19.

Ancelotti tested positive for the coronavirus last week and did not travel to London with the rest of the squad on Tuesday.

There was a possibility he could still make it for Wednesday’s match if he tests negative in time to travel.

Ancelotti had already missed the team’s 2-1 win over Celta Vigo in the Spanish league on Saturday, when assistant coach Davide Ancelotti, his son, was among those in charge.

“He’s a big, big coach, big personality,” Chelsea coach Thomas Tuchel said. “It would be nice to have him on the sideline in these kinds of games.”

Ancelotti, who had minor symptoms of COVID-19, is trying to win his second Champions League with Madrid after helping the club lift the European trophy in 2014.

Karim Benzema and Ferland Mendy, who returned to action on Saturday after nursing injuries, practiced normally ahead of the trip to England.

“Last season’s tie was different,” Madrid goalkeeper Thibaut Courtois said. “There were no fans and it was at the semifinal stage. This is a new season, it's the first leg of the quarterfinals and we're all feeling really good and know what’s at stake.”

Madrid played the first leg of last year's semifinal against Chelsea without fans at the small Alfredo Di Stéfano Stadium in the club's training center because renovation work was taking place at the Santiago Bernabéu Stadium. The teams drew 1-1 in the Spanish capital before Chelsea won 2-0 in the second leg in London.

Ancelotti coached Chelsea for two years before his first stint with Madrid in 2013. The Spanish club was coached by Zinedine Zidane in last year's semifinals.

Ancelotti had been the target of criticism in Spain after the team's demoralizing 4-0 loss to Barcelona at home in the Spanish league last month, when his experiments with the squad backfired.

With Benzema out injured, Ancelotti tried to use Luka Modric in the false-nine position instead of adding another forward, but the move didn't work and Barcelona easily built the victory at the Santiago Bernabéu Stadium.

The hard-fought win against Celta — with two penalty kicks converted by Benzema — left Madrid 12 points ahead of Barcelona entering the final stretch, though the Catalan club has a game in hand.

Ancelotti's first stint with Madrid ended after criticism he didn't rotate his squad enough, leading to injuries to his players and to a loss of performance toward the end of the season.

Benzema and Toni Kroos were among the players who missed matches because of injuries recently.

Madrid had won five games in a row in all competitions before the loss to Barcelona, including beating Paris Saint-Germain 3-1 in the second leg of the round of 16 of the Champions League when Benzema rallied the team with a second-half hat trick after losing the first leg in Paris 1-0.

Madrid or Chelsea will play either Manchester City of Atlético Madrid in the semifinals.