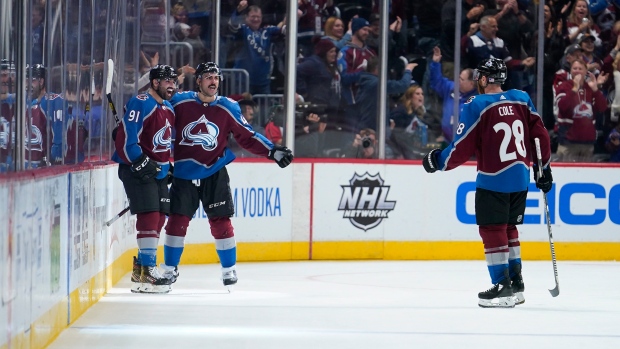 DENVER — Cale Makar's anticipation was off but his shot was dead on. It was exactly what the depleted Colorado offence needed.

Makar scored twice, including a go-ahead goal late in the second period, and Pavel Francouz stopped 39 shots to lead the Avalanche to a 4-2 win over the Columbus Blue Jackets on Saturday night.

Nazem Kadri had a goal and an assist, Samuel Girard also scored and Tyson Jost had two assists for Colorado, which has won two in a row despite losing another player to injury.

Forward Pierre-Edouard Bellemare left the game late in the second period when he was elbowed in the head by Columbus' Nick Foligno. The Avalanche were already without forwards Gabriel Landeskog, Mikko Rantanen and Colin Wilson as well as defenceman Nikita Zadorov and goaltender Philipp Grubauer.

With so many players sidelined the Avalanche have needed offence from their blueliners and they've come through, scoring five goals in the past two games.

"We need that. It takes five guys to create offence in this league now," Colorado coach Jared Bednar said. "You can't just send your forwards into five guys and expect them to create goals and points."

Emil Bemstrom and Zach Werenski scored and Joonas Korpisalo had 32 saves for Columbus.

The Avalanche trailed by a goal when Makar tied it with his third at 10:52 of the second when he beat Korpisalo over the goaltender's left shoulder.

He gave Colorado the lead later in the period, relying on instinct and a little luck when he and Jost came charging into the offensive zone on an odd-man rush. Jost hesitated and then slid a pass to Makar, who beat Korpisalo with a low shot with 3:49 left in the period.

"I wasn't expecting it," Makar said. "It was an unreal pass, and when I picked my head up I had the whole net, so I panicked a little bit, kind of froze and threw it a little late. I saw the five-hole was wide open and I just put it there."

A minute later Foligno left his skates to hit Bellemare near centre ice, and Bellemare fell and hit his head on the ice. He was helped off and went to the locker room.

Foligno was given a charging major and a game misconduct.

"I actually didn't know I hit him in the head at all. That's why I was reacting the way I did when I saw the replay," Foligno said. "There was no intent to hit him like that at all. I'm trying to line him up at the time and then he kind of turns back and makes that play. It just happened so fast and I felt sick to my stomach when I saw that I hit him in the head. My main concern is that he is OK. I got word from their locker room that he's feeling all right. .., I never want to hurt anyone. I think my track record speaks for itself. I would never maliciously try to (hurt) somebody."

Bednar did not have an update on Bellemare's condition after the game.

Columbus pushed for the equalizer but Kadri's goal with 2:06 left in the third sealed Colorado's win soon after Makar missed on a chance that would have given the rookie his first career hat trick.

"Any time you get some adrenaline going down to the end of it, it's awesome," Makar said. "I think it was bigger just seeing Kadri bury that one."

The Blue Jackets led 2-1 after the first period on goals by Bemstrom and Werenski, the latter coming with less than a minute left before intermission. Girard had tied it four minutes earlier with his first goal of the season.

NOTES: Zadorov had surgery Friday to repair his broken jaw suffered in Thursday's win over Nashville. He is considered week-to-week. ... Columbus D Markus Nutivaara sat out his second straight game with an upper-body injury. ... Colorado recalled C Jayson Megna from the Eagles of the AHL. He was a healthy scratch Saturday.

Blue Jackets: At Montreal on Tuesday night to wrap up a three-game road trip.

Avalanche: At Winnipeg on Tuesday night to start a five-game road trip.