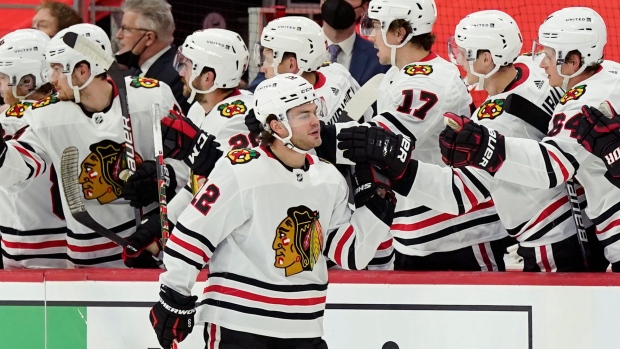 DETROIT — Malcolm Subban made 29 saves for his second shutout of the season, helping the Chicago Blackhawks beat the Detroit Red Wings 4-0 on Saturday night.

Patrick Kane had a goal and an assist for Chicago, which was coming off a 4-1 loss to last-place Detroit on Thursday night. Alex DeBrincat, Wyatt Kalynuk and Pius Suter also scored, and Vinnie Hinostroza had three assists.

The Blackhawks are trying to catch Nashville for the fourth and final playoff spot in the Central Division. They got a big lift from Subban, who turned in his third career shutout while starting goaltender Kevin Lankinen got the night off for rest.

The Blackhawks play the Predators on Monday night in Nashville and Wednesday and Friday at home.

“Everyone knows where we are in the standings. To win this game how we did, 4-0, battled the whole game, it’s great going into this three-game series we have with Nashville,” Hinostroza said. “These will be the biggest three games of the year. This group is excited and it’s huge we got the momentum going into it.”

Jonathan Bernier stopped 23 shots for Detroit, which had won a season-high three straight.

The Red Wings were 0 for 6 on the power play, including a four-minute power play in the first period and a 1:07 5-on-3 advantage in the third.

“I would say that the difference in the game was our power play was brutal,” Detroit coach Jeff Blashill said.

Despite being outshot 10-5 in the first period, Chicago led 1-0 at the first intermission, thanks to Kane’s 15th goal with 21 seconds left. Kane put a one-time shot from the right circle into the open side of the net after taking a cross-slot pass from Hinostroza, who stole the puck from Detroit defenceman Troy Stecher in the Red Wings zone.

DeBrincat made it 2-0 when he put in a rebound with 7:20 left in the second. It was the 22nd goal for DeBrincat, who is from the Detroit-area suburb of Farmington Hills.

Kalynuk scored his second goal 1:16 into the third period, and Suter collected an empty-net goal with 4:33 left. It was Suter’s 12th goal.

Detroit signed forward Lucas Raymond, the fourth-overall pick in the 2020 draft, to a three-year, entry-level contract on Friday. Raymond, 19, is with Frolunda of Sweden’s top league, but is out with an injury.