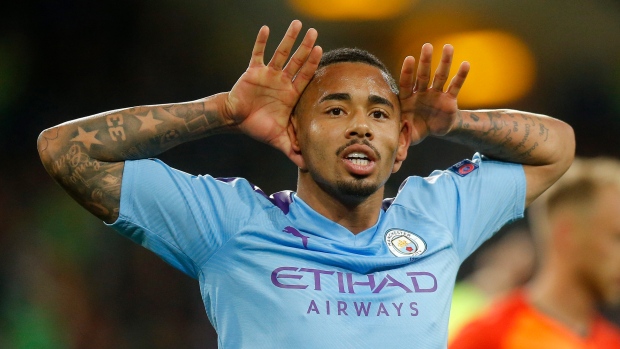 After Chelsea and Liverpool lost and Tottenham drew, City cruised past its Ukrainian opponent. Riyad Mahrez and Ilkay Gundogan combined for the first two goals, with Mahrez scoring the opener from a rebound after Gundogan hit the post in the 24th minute.

For the second, the roles were reversed. Mahrez cut inside to pass for Gundogan, who shot past Andriy Pyatov at the near post. Gabriel Jesus made it 3-0 on the break in the 76th.

City was coming off a 3-2 loss to Norwich in the English Premier League on Saturday and had injury problems in defence.

"I think it was necessary to respond and we responded quite well, all of us," Gundogan said. "They created good chances also but we were solid at the back (with) two very experienced players."

City's hastily assembled centre-back pairing of Nicolas Otamendi and former Shakhtar player Fernandinho — covering for the injured John Stones — held up well. Although Fernandinho, who is normally a midfielder, was perhaps lucky not to give away a penalty with a late tackle.

"Others can play in that position, but I think Fernandinho is a clever player and so intelligent, and an incredible guy, so he did well," City coach Pep Guardiola said.

It is the third season in a row that City has played Shakhtar in the Champions League group stage. This time the Ukrainian team lacked the attacking firepower of the squad which won 2-1 to end a lengthy City unbeaten run in 2017.

Junior Moraes had Shakhtar's best chance of the game in the 34th but shot straight at City goalkeeper Ederson when in behind the defence. In the second half, he missed the target with Ederson out of position.

After Dinamo Zagreb surprised Italian debutant Atalanta 4-0 in the other game, City's chances of qualifying top of Group C only increased.

There was another boost for City as left-back Benjamin Mendy came on as an 83rd-minute substitute, his first appearance since April due to the various injury problems which have restricted him to just four games in the last 10 months.