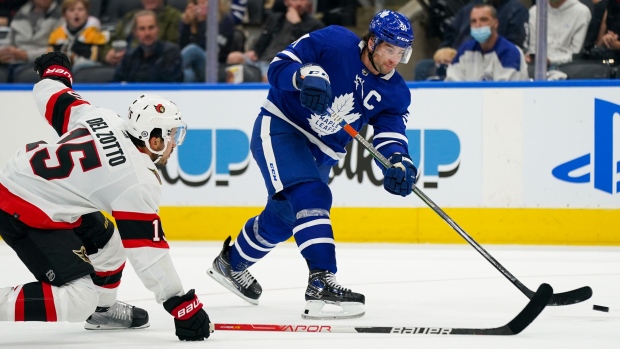 TSN Toronto Reporter Mark Masters reports on the Maple Leafs, who practised at Ford Performance Centre on Tuesday ahead of their 2021-22 season opener Wednesday against the Montreal Canadiens at Scotiabank Arena.

With Auston Matthews (left wrist) out of the lineup this week, John Tavares will be Toronto's top-line centre to start the season. Tavares scored two goals and added three assists in the four games Matthews missed last season.

"Nothing really changes," the 31-year-old said. "Just play my game. Auston's missed some games in the past and I've been through similar circumstances so just continue to prepare like I have and understand my role and responsibility and go out there and play at a high level."

Sidelined with a concussion and knee injury in the playoffs, Tavares arrived at training camp this year determined to turn the page on that scary collision with Corey Perry during Game 1 of the Leafs’ first-round playoff series against the Montreal Canadiens last May.

"He looks incredible," gushed goalie Jack Campbell. "He didn't miss a beat. Right away, first practice, he looked like a man on a mission. There's no better way to lead than to go out there and dominate and that's what he's been doing and we're going to need that from him all year."

"John is as focused as I've ever seen him," said coach Sheldon Keefe. "He's a very focused and committed guy, but I just feel like he's taken it to another level."

"He put in a lot of hard work," noted friend Jason Spezza. "He did lots of stuff to make sure when camp started, he felt completely comfortable. He was doing contact drills leading up. Johnny's such a detailed guy that there's no stone unturned and he was going to be ready to go."

Last year, Keefe spoke about setting new, higher standards in Toronto. This year, it's about raising the standards and, in that regard, Tavares is setting the tone.

"He is very driven personally and, also, as he is leading our group," said Keefe. "We are seeking the ultimate goal here, which is to put together a program that sustains itself in difficult times."

"It's about pushing the envelope," said Tavares, "and finding ways to stay consistent ... [and] finding ways to get better and challenge ourselves to continuously never feel like we're comfortable with the way we're playing."

The Leafs looked really good in the regular season last year winning the North Division, but then they squandered a 3-1 series lead against the Canadiens. Toronto controlled much of the play, including a strong stretch late in Game 5 and in overtime of Game 6.

"There's plenty of teams around the league [and] certain players that, even though they don't have the puck and you have the puck, they seem to be in control of the game," Tavares said. "Those are little details that, as we get into it more systematically, we can talk about as a group whether it's mindset or executing those type of things."

'It’s about pushing the envelope': Captain Tavares is a 'man on a mission'

After a horrific injury forced John Tavares to leave Game 1 of the playoffs last season, the Leafs captain has come to camp with a renewed energy, and his teammates have taken notice. Mark Masters has more.

Even at age 38, Spezza still gets pumped for opening night.

"You remember being like nine [years old] before Christmas? It's kind of the same feeling," the Toronto native said with a smile. "It's a cool feeling to have a new season begin and it doesn't get old."

This will be Spezza's third season with his hometown team, but the first true home-opener experience. A couple years ago, then coach Mike Babcock made him a healthy scratch on opening night. Then, last season, there were no fans in the building due to pandemic restrictions.

Spezza will have his parents, Rino and Donna, in the crowd on Wednesday night.

"It's something that you don't take for granted," Spezza said. "It's special to play in Toronto. It's special to be part of a home opener. These are all things that are really cool things, it doesn't matter how old you are or how long you've been around for. So, I'll be excited to go."

Spezza, who's entering his 19th NHL season, will have a new role with the Leafs on Wednesday. With Matthews out at least three games, Spezza is moving up to that flank position with the top power-play unit.

"I've played on lots of power plays so I'm just going to do my thing," Spezza said. "We talked about it this morning and went over the options. Obviously, we'd like to have Matty there. He's the ace in that spot, but for now I can hopefully do a good job and get us to a good start."

Keefe has labelled the power play the No. 1 area in need of improvement when it comes to the offensive side of Toronto's game. The team surged out of the gate last season before fading badly down the stretch and finishing 16th overall in power-play percentage.

Ilya Mikheyev had been filling in with the top power-play unit during the last couple pre-season games, but sustained a broken thumb on Saturday and will miss eight weeks.

"We have been primarily using left-handed players through camp as placeholders for Auston," Keefe said. "Mikheyev is not available for us now. I thought he had done a pretty good job for us in that spot. We had to make a decision. Spezza has spent a lot of time throughout his career on that flank. Even though he is a right-handed guy, we just thought in terms of skill-set, experience and leadership, he is the guy that can step in well in that spot. We are going to give him that opportunity."

Leafs Ice Chips: Spezza is like a kid on Christmas eve

The Leafs held their final practice ahead of the regular season, and the excitement of the new campaign hasn't been lost on 38-year old veteran Jason Spezza, who gets to final play in his first true home opener. TSN's Mark Masters has more.

Mitch Marner left practice early after a collision with Wayne Simmonds during a drill.

"He had a bit of a glancing blow there with Simmer," Keefe said. "It is just precautionary at this point in time. We will evaluate in the morning and take it from there."

"You never want to see anyone leave practice," Tavares said, "especially a guy that we count on a lot so hopefully nothing too serious and he'll be ready to go."

Marner stayed on the ice for a few minutes after the collision. He had a conversation with assistant athletic therapist Jon Geller at the bench. After that he skated over to Keefe to share a few words before departing.

"Not really concerned," said Spezza. "I think it was just precautionary and he probably wanted a rest (smile). I think he'll be fine. I haven't talked to him so maybe I shouldn't make light of it, but it seemed like it was a pretty minor thing."

Mitch Marner’s status is up in the air after he left practice early following a collision with Wayne Simmonds. Head coach Sheldon Keefe said that Marner leaving was just precautionary, and that ''we'll evaluate him in the morning and take it from there.”

The Leafs will employ a tandem system in net this season. Newcomer Petr Mrazek, who inked a three-year deal with the Leafs in the summer, owns a longer contract than Campbell, but the opening-night job was always earmarked for the incumbent. It will be the first time Campbell starts a season-opening game in the NHL.

"It is a great accomplishment for him," Keefe said. "He has been through a lot to get to this position. He has worked extremely hard. He has had to continue to believe in himself and deal with adversity. He has earned the confidence of our organization here and of his teammates. He has been terrific all the way through camp. He has accepted a new partner here in Petr and worked very well with him in terms of that tandem. I am excited for him for this season. It wasn't even a question of who was going to start this game all off-season and all through camp. He has never given us a reason to think any different."

Campbell, who's in the final year of his contract, learned the news via a text from goalie coach Steve Briere on Monday. Who's the first person he told?

"I actually haven't told anybody so, I guess, you guys," Campbell said with a smile.

The Michigan native was a first round pick in 2010, but struggled under the weight of lofty expectations and never emerged as the go-to guy for an NHL team until last season after Frederik Andersen got hurt.

"It definitely feels good to put the work in and get rewarded, but it's just one step," the 29-year-old said. "I always expected to be in this position, I just didn't perform enough to be able to. Now, I just expect it out of myself."

Andersen started the last five season openers for the Leafs.

'It wasn't even a question': Campbell gets first ever season-opening start

Jack Campbell will make the first opening night start of his career Wednesday night when the Maple Leafs host the Canadiens. Head coach Sheldon Keefe said that even with the addition of Petr Mrazek, it wasn't a question as to who would lead the team onto the ice on opening night.

Campbell is a beloved figure in the Leafs dressing room thanks to his fun-loving personality. Earlier in training camp, he expressed a desire to organize a team dinner at Red Lobster. On Monday night, he held a party for his cat.

"My cat's second birthday," Campbell said. "It was a big day and a lot of fun. It was great. I adopted Buds the January before I got traded [to Toronto] in February [2020]. I was always a dog guy, I just wasn't ready for a dog maturity-wise. I just felt like it was a huge responsibility, but I'm going to get one really soon here so I'm excited."

Why the name Buds?

'It was a big day': Leafs' Campbell throws birthday for cat 'Buds'

Leafs goalie Jack Campbell pulled back the curtain to shed some light on some of his personal life on Instagram as he shared pictures of his cat Buds' birthday.

Toronto finished 24th in penalty-killing percentage (78.5) last season, but Keefe suggested part of that is tied to goaltending.

"Our penalty kill has terrific potential here," Keefe said. "I think our penalty kill was probably underrated last season with some of the results. If you just look at the games that Jack Campbell played, I think we were up around 90 per cent on the penalty kill, which would have been the No. 1 penalty kill in the NHL over the course of the season."

Campbell posted an impressive .913 save percentage in 22 games when the Leafs were shorthanded last season. Meanwhile, Andersen (.791 in 24 games), Michael Hutchinson (.889 in eight games) and David Rittich (.750 in four games) all lagged behind in that department.