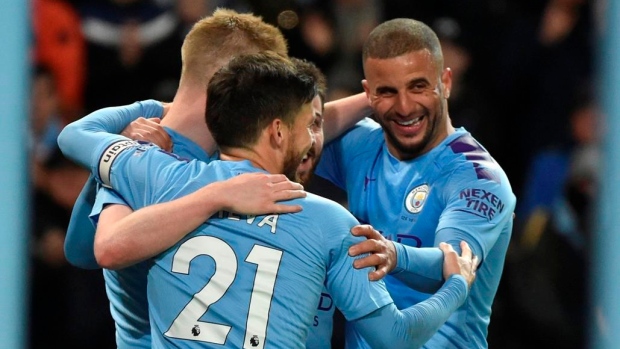 MANCHESTER, England — To the backdrop of some aggressive anti-UEFA chants and banners, Manchester City beat West Ham 2-0 in the Premier League on Wednesday in its first match since being banned from European competitions for the next two seasons.

A UEFA panel handed out the punishment on Friday after judging that City broke financial monitoring rules and did not co-operate with investigators. City denies wrongdoing - and will appeal against the decisionto the Court of Arbitration for Sport - and its fans made their feelings known throughout the game at Etihad Stadium, chanting songs overtly in support of the team and against European soccer’s governing body.

One of the expletive-laden chants by home supporters included the line: “We'll see you in court."

How a ban would affect the futures of City’s superstar players remains unknown but they didn’t seem too affected against West Ham, dominating the gamewith an extraordinary possession figure of 78% and scoring goals through midfielders Rodri and Kevin De Bruyne.

City moved four points clear of third-place Leicester but the gap to Liverpool is still massive - at 22 points - with 12 games to go in the campaign.

A sixth defeat in West Ham’s last nine games kept the London club in the relegation zone, a point from safety, ahead of a trip to Liverpool on Monday.

De Bruyne is the player most City fans would fear losing if the club fails to overturn the UEFA ban, and he demonstrated his excellence again.

It was the Belgian’s corner that was met by a glancing, near-post header from Rodri in the 30th minute, making it 1-0 and giving De Bruyne his league-leading 16th assist of the season.

De Bruyne created a number of great chances for his teammates - Gabriel Jesus spurned two of them when one on one with West Ham goalkeeper Lukasz Fabianski - so he took it upon himself to add the second, exchanging passes with Bernardo Silva and driving home a low finish inside the near post.

“The situation is what it is,” De Bruyne said. "We came back (from the midseason break) and trained like normal. For us, nothing really changed.

“We still have a lot to play for with the two cups (FA Cup and English League Cup) and Champions League, so let's hope we can find rhythm as quickly as possible and win some titles.”

One of the loudest cheers of the evening greeted the introduction of a West Ham player, Pablo Zabaleta, as a 58th-minute substitute. Zabaleta played for City from 2008-2017, made 333 appearances, and was described as a “legend” of the clubby City manager Pep Guardiola before the Argentine left when his contract expired.

City midfielder David Silva came off carrying an apparent left leg injury late in the second half, while centre back Aymeric Laporte played 64 minutes before being substituted in only his second appearance since August because of injury.

It was a game rearranged from Feb. 9, when storms sweeping through northern Europe caused it to be postponed.