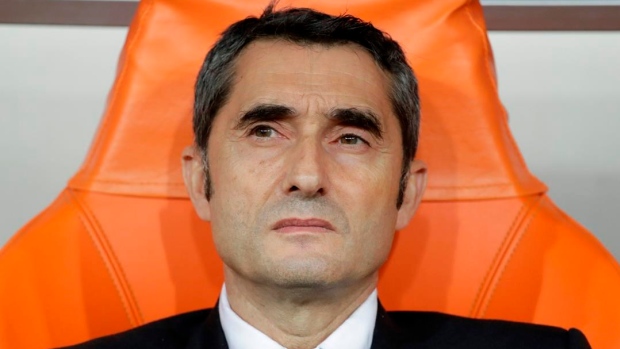 Manchester United is moving forward in its search for an interim manager to guide the club through the remainder of the season following the dismissal of Ole Gunnar Solskjaer on Sunday.

Among those the Red Devils are in talks with is former Barcelona manager Ernesto Valverde, reports The Telegraph's James Drucker.

Former Lyon manager Rudi Garcia, ex-Borussia Dortmund boss Lucien Favre and former RB Leipzig manager Ralf Rangnick are also believed to be in the frame for the interim role. Notably, none of the men being considered by United has Premier League experience.

Valverde spent two and a half seasons at Camp Nou from 2017 to 2020, winning a pair of La Liga titles. Having worked with the likes of Lionel Messi, Neymar and Luis Suarez, Valverde is thought to have the right kind of experience to manage Cristiano Ronaldo and the rest of the star-laden squad at Old Trafford.

The club's thinking could change based upon the availability of Paris Saint-Germain manager Mauricio Pochettino. Believed to be the club's first choice for permanent manager, Pochettino is under contract until 2023 with the Ligue 1 giants, but considers United a dream job. Indications are that Pochettino would take the job now, provided that PSG and United come to some kind of compensatory agreement.

On Tuesday, Pochettino attempted to throw cold water on the talk, saying he was happy in Paris, but stopped short of committing his future to PSG.

"This kind of thing cannot distract," Pochettino said of the rumours ahead of Wednesday's Champions League date with Manchester City. "Rumours are there, we need to live with that. We are so focused, giving 100 per cent to get our best from the club and the players. I am so happy at Paris Saint-Germain, for tomorrow we are so focused to get the best results we can."

Ajax manager Erik ten Hag and Leicester City boss Brendan Rodgers are both believed to also be candidates for the permanent role.

Michael Carrick, a club legend and coach under Solskjaer, managed United during Tuesday's 2-0 Champions League victory over Villarreal and will likely do the same on Sunday when the team travels to London to take on leaders Chelsea at Stamford Bridge.