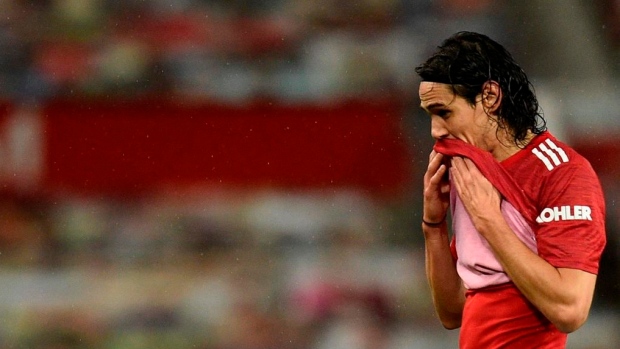 MANCHESTER, England — Manchester United was held by Chelsea to 0-0 in the English Premier League on Saturday to leave the host without a win at Old Trafford from the opening three matches for the first time in 48 years.

United striker Marcus Rashford was denied the chance to grab a late winner when Edouard Mendy's flying save kept out a curling shot. Chelsea's new goalkeeper also produced fine saves to thwart Rashford and Juan Mata in the first half in heavy rain.

Uruguay forward Edinson Cavani made his United debut off the bench in the second half and almost scored with his first touch when he flicked a corner goalward at the near post.

Chelsea had a penalty overlooked before halftime after United captain Harry Maguire wrestled Cesar Azpilicueta to the ground when heading away a free kick.

“I felt his arms around my neck and shoulder,” Azpilicueta said. “The referee can make the decision and VAR is there. It is difficult but I would encourage the referee to go and look at the monitor. It is there to help so why not take 20 seconds to go and review it?

“Contact happens in football and I don’t say all contact is a penalty, no, far from that. But we all need to work together to make the game better.”

United has two points fewer — having played a game less — but is 15th after already losing at home to Crystal Palace and Tottenham.

Chelsea is sixth with nine points from six games.

“We should be happy with some of the things we are seeing defensively now,” Chelsea manager Frank Lampard said.