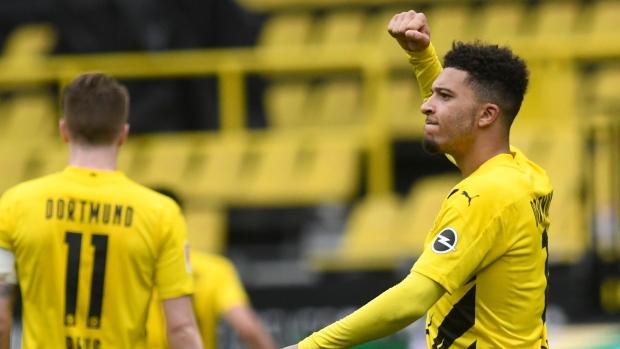 Manchester United's protracted negotiations to sign Jadon Sancho from Borussia Dortmund have resulted in a deal over a year into them.

The Athletic's David Ornstein reports BVB has accepted a £72.9 million bid for the England winger.

🚨 Manchester United and Borussia Dortmund have total agreement for the transfer of Jadon Sancho to Old Trafford in an €85m deal. 21yo winger has green light to finalise personal terms and undergo a medical before completing move @TheAthleticUK #MUFC #BVB https://t.co/7H8rT5QJax

Sancho, 21, is expected to sign a five-year deal with the Red Devils through 2026 that will be made official upon the completion of a medical.

The native of London is currently on international duty with the Three Lions, but has yet to see game action in any of their four matches thus far.

Sancho has spent the past four seasons with the Bundesliga side following a reported £8 million move from Manchester City. City is believed to have included a sell-on clause in the sale to Dortmund, meaning that the club is entitled to 15 per cent of the transfer fee set to be paid out by their crosstown rivals.

Over four seasons, Sancho has made 137 appearances across all competitions, scoring 50 times.

Internationally, he's been capped 20 times by England and has three goals.

When completed, the deal will be the fourth-highest transfer in United's history, trailing only Paul Pogba (£94.5 million), Harry Maguire (£78.3 million) and Romelu Lukaku (£76.23 million).