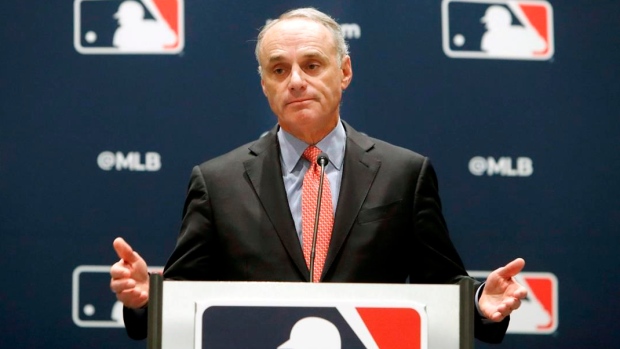 There are some people who believe that this week has been one of the darkest periods in the history of baseball.

But I believe it has been one of the best weeks for Major League Baseball.

Baseball is in a better place today than it was on Monday, when MLB commissioner Rob Manfred dropped a sledgehammer on the Houston Astros, suspending AJ Hinch, the club’s manager, and general manager Jeff Luhnow for the entire 2020 season for their team’s sign-stealing schemes in 2017 and 2018.

Sure, there has been some pain and there will likely be more as the sign-stealing scandals unravel. But the game is getting cleaner and healthier.

And clearly baseball is in very good hands. Manfred has proven to be a man of his word.

In his Sept. 15, 2017 memo to all managers and general managers, he put clubs on notice that any efforts to steal signs using electronic devices would be punished with serious sanctions and a possible loss of draft picks. This was after an investigation proved that the Boston Red Sox had used an Apple Watch in the dugout to communicate with their replay review room, relaying signs to runners on second base and ultimately to hitters.

In addition to the suspensions, the Astros lost two first-round picks and two second-round picks, plus the organization received the biggest fine allowed per the MLB Constitution ($5 million). Astros owner Jim Crane took the commissioner’s ruling even further by terminating the employment of his suspended manager and general manager.

Baseball’s investigation revealed an arrogant and blatant attempt to cheat by the Astros, even after the warning from the commissioner. In fact, the Astros’ sign stealing led to an 8-1 home record in the 2017 postseason, compared to a 3-6 road record in route to a World Series championship victory over the Los Angeles Dodgers. Sign-stealing worked.

The mastermind of the Astros’ cheating plan was bench coach Alex Cora, who parlayed the Astros success into his first managerial job as he was hired to manage the Boston Red Sox in 2018.

When he packed his bags to head to Boston, he boldly brought with him the same sign-stealing tactics that worked so well in Houston. They did the job in Boston as the Red Sox went on to win the 2018 World Series, also against the Dodgers. Unfortunately for Cora, the MLB investigation into the Astros opened doors into what he was doing in Boston and he was soon in hot water for his actions in both places.

The Red Sox decided on Tuesday to “mutually agree” (they fired him) to part ways with Cora. He had won two rings but lost the one job he had always wanted.

There was not a single player disciplined by the commissioner in the Astros investigation as Manfred gave immunity to players involved in order to get to the bottom of the story. Plus no player could unilaterally implement a sign-stealing scheme using technology without the assistance of a coach, manager or the front office.

The only player named in the MLB investigation of the Astros was veteran outfielder Carlos Beltran. Per the report, Beltran along with Cora, spearheaded the plan in Houston and oversaw its ongoing maintenance and adjustments.

So why was Beltran’s name included in the report? Likely because when the story first broke Beltran denied multiple times to the media that he knew anything about it. Based upon the investigation, Beltran’s denials were lies.

Beltran’s actions have put the New York Mets in the spotlight now as they hired him as their new manager in early November. In his introductory press conference in New York, general manager Brodie Van Wagenen referenced Beltran’s trustworthiness as a big reason why he was hired.

He will not be disciplined by the commissioner for his role with the Astros, but the Mets now have to decide whether Beltran can still function in his role leading the team and interacting with the media. Whether he can or not remains to be seen, but his ability to thrive in his new role in New York has been significantly compromised.

Discipline and penalties have two functions: penalizing and deterring. The commissioner delivered both with his sledgehammer.

The Astros now know their penalties and will now suffer for them. The Red Sox have lost their manager and will likely face the loss of draft picks and face steep fines like the Astros. The penalties will appropriately and significantly set back the two franchises in the short and mid-term.

The suspensions and ultimate dismissal of the managers and general manager involved in the sign-stealing scandals will have the desired effect. No manager or general manager will allow sign stealing to occur ever again.

The loss of a job, reputation, credibility and money will serve as a very worthy deterrent moving forward. The penalties have made it personal for the managers and general managers. There is no way any team’s manager and general manager will allow a player or coach on their team to cost them their jobs ever again. The pain of the penalties outweigh the benefits of cheating. And just as they should.

Cheating compromises the integrity of the game. In the end, it hurts everyone. Commissioner Manfred has taken a huge step toward restoring that integrity.

It is indeed a bright day for baseball!