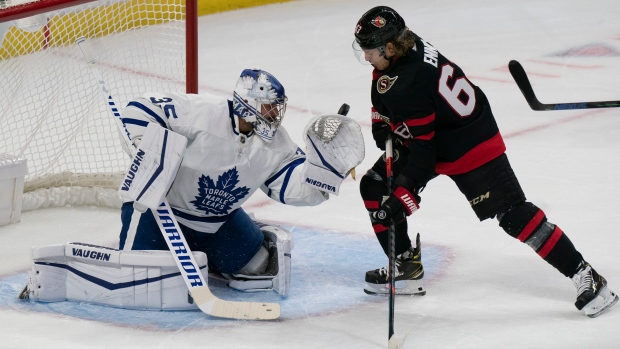 Michael Hutchinson will be at Leafs' practice on Sunday after University of Toronto goalie Alex Bishop was signed to a one-day amateur tryout on Saturday, serving as a backup against the Senators.

Michael Hutchinson will be at practice tomorrow @TSN_Edge

Mrazek missed the third period of Thursday's game with the injury.

The 29-year-old Mrazek, who signed a three-year contract with the Maple Leafs this summer, allowed three goals on 23 shots in his first regular season start with his new team.

A native of Czech Republic, Mrazek posted a 6-2-3 record with a 2.06 goals-against average and a 0.923 save percentage over 12 games with the Carolina Hurricanes last season, his ninth in the NHL