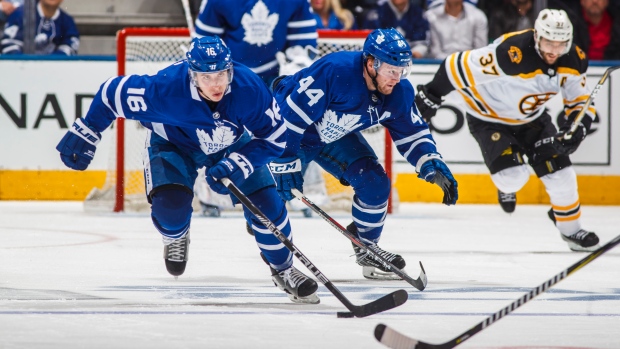 According to TSN Hockey Insider Darren Dreger, the Toronto Maple Leafs have been "persistent" in pushing both seven- and eight-year extension offers to restricted free agent Mitch Marner this summer.

Dreger reports the Maple Leafs made an offer of $11 million per season in June, which included the $1.6 million Schedule B bonus Marner did not receive in his entry-level contract. TSN Hockey Insider Bob McKenzie adds that since the average annual value was lower than Auston Matthews' new contract on a longer term, the $11 million salary hasn't been palatable to Marner's camp. Matthews signed a five-year, $58.17 million contract with the Maple Leafs in February, which carries a cap hit of $11.634 million through the 2023-24 season.

According to Dreger, a three-year extension remains the focus of the Marner camp, though that term could be problematic for the Maple Leafs since a rising salary structure could see Marner earn as much as $12 million in 2021-22 then accept the team's qualifying offer at that salary and reach unrestricted free agency in 2023.

McKenzie believes a "logical solution" for the two sides would be a three-year bridge contract, but Marner's ask of average annual value of $9-10 million on such a deal gives the Maple Leafs no incentive to do so. He adds it's "hard to see the way to a settlement unless one side or the other makes a seismic shift."

The logical solution would be a three-year bridge but because Marner wants an AAV in the $9M to $10M universe and the third year (base for QO) would be substantially higher, TOR has no incentive to do the bridge at those numbers. Hard to see the way to a settlement...

The 22-year-old remains one of several high-profile restricted free agents who remain without a contract, including Brayden Point of the Tampa Bay Lightning, Colorado Avalanche winger Mikko Rantanen, Matthew Tkachuk of the Calgary Flames, Winnipeg Jets forwards Patrik Laine and Kyle Connor and Brock Boeser of the Vancouver Canucks.

Zach Werenski of the Columbus Blue Jackets signed a three-year deal earlier this week, which carries a $5 million average annual value, but will see him earn $7 million in the final year of the contract. TSN Senior Hockey Reporter Frank Seravalli wrote Monday that other restricted free agents could seek a similar contract structure to end their standoffs.

Dreger reported earlier this week that barring a change in his contract negotiations with the Maple Leafs, he believes Mitch Marner is planning to fly to Switzerland later this month to train with the Zurich Lions, who his camp reached out to earlier this summer.

Maple Leafs general manager Kyle Dubas said last week the team hasn’t explored trade options for Marner and said it was the team's “hope and our goal” to have him signed when the team opens training camp on Friday. The team endured a long standoff with restricted free agent William Nylander last season that extended to the Dec. 1 deadline to sign.

“I don’t think we want anybody to miss any day or training camp, period," Dubas told McKenzie. "So we’ll continue to work towards that and remain hopeful. As I’ve said throughout, I’m optimistic about it and we lived through it last year. We saw the effect of a player who missed training camp, missed exhibition, missed the first two months of the season and it’s tough. It’s tough to expect that player is just going to jump back in and be at the level that we expect – especially at the pay that they’ve previously earned from their previous seasons. And then when that doesn’t work well, then criticism flows in and it makes it even tougher.

Marner was drafted in the first round (fourth overall) by Toronto in 2015 and was named to the NHL’s All-Rookie Team in 2017.