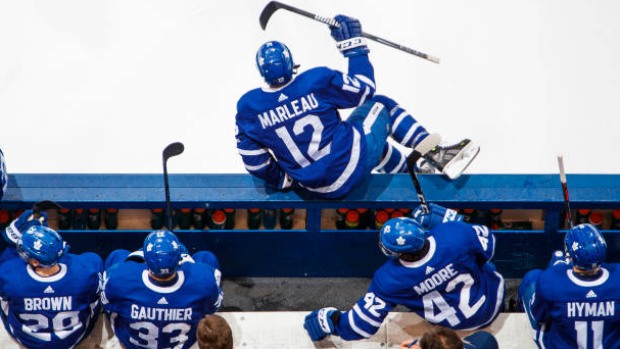 On the eve of the trade deadline, I looked at every playoff contender to assess possible areas of opportunity for general managers hunting for roster improvements.

The Toronto Maple Leafs were one of the more interesting teams for a multitude of reasons. Their window for Stanley Cup contention is clearly now, though their road to the trophy in the 2018-19 season is downright brutal. Facing an increasingly challenging salary cap situation and having already moved assets to Los Angeles to upgrade their blueline with Jake Muzzin, there was something of a chilling effect on what the Maple Leafs could reasonably do by way of trade.

That said, I did think the team could find a hidden upgrade by re-shuffling their lineup. Here’s what I wrote about the Maple Leafs a little over a month ago:

It’s important to draw careful distinctions when we talk about lineup optimization and deployment, so I’ll make sure to reiterate one point from the above paragraph. Patrick Marleau is a very capable player, even at the ripe age of 39 years. But there’s a big difference between being a very capable player and a very capable player getting first-line minutes, especially in the NHL’s modern era. Five-on-five performance is critical, and considering how many younger, more productive attackers the Maple Leafs have available to them, Marleau’s deployment never made a lot of sense.

Whether you look at his counting numbers or more sophisticated, all-encompassing measures like Goals Above Replacement (GAR), it’s clear that Marleau isn’t producing in the same manner he once did. Compare his career peak (circa 2009-12) to where he is now, and it’s night and day. (For what it is worth, Marleau’s 2018-19 GAR rating is 11th amongst regular Toronto forwards, sandwiched between Nazem Kadri and Connor Brown. Mitch Marner, John Tavares, and Auston Matthews lead the forward group at around 0.7 per 60 minutes of play.) 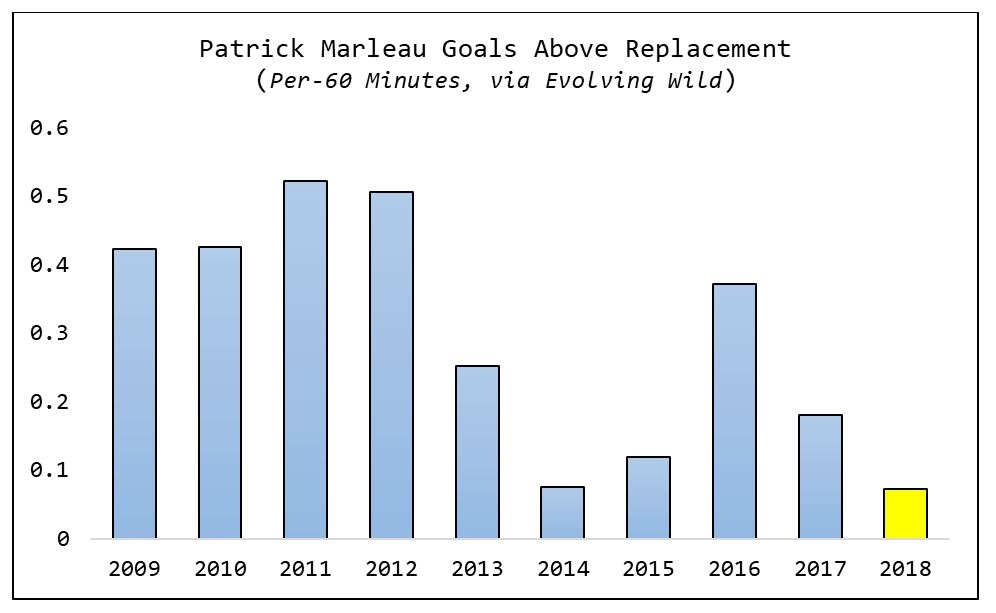 At any rate, I’ve been following Marleau’s usage since that trade deadline piece and am left to conclude one of two things: either the Maple Leafs recognized that Marleau was playing too many minutes relative to what he was adding, or they are resting the veteran for important miles come playoff time.

I can’t factually rule out the latter being a possibility, but I can posit a counterargument to it: Toronto really hasn’t changed their usage for any other player down the stretch, including 37-year-old Ron Hainsey on the blue line.

Below, I pulled out each Maple Leafs skater’s ice time ranks by calendar month, along with a monthly average of Marleau’s actual 5-on-5 minutes since the beginning of the season. It’s clear that something has changed, strategically speaking: 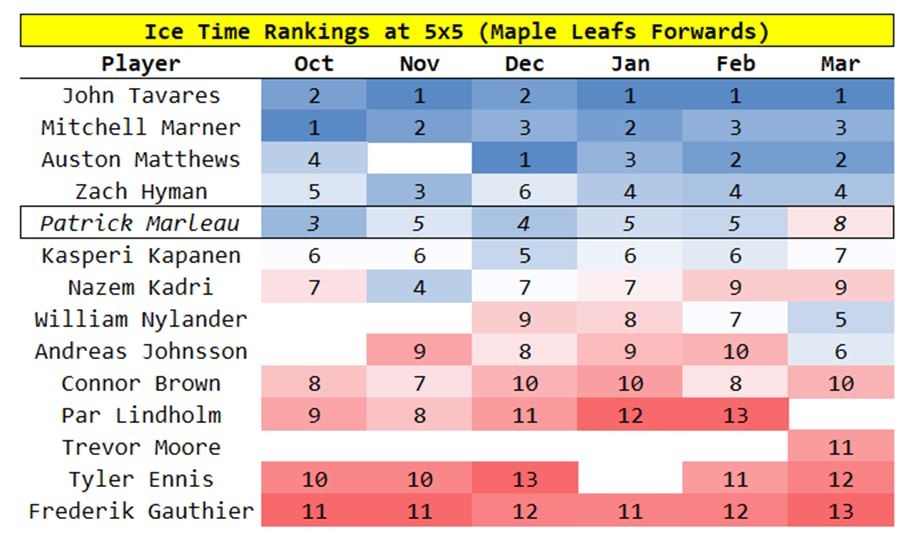 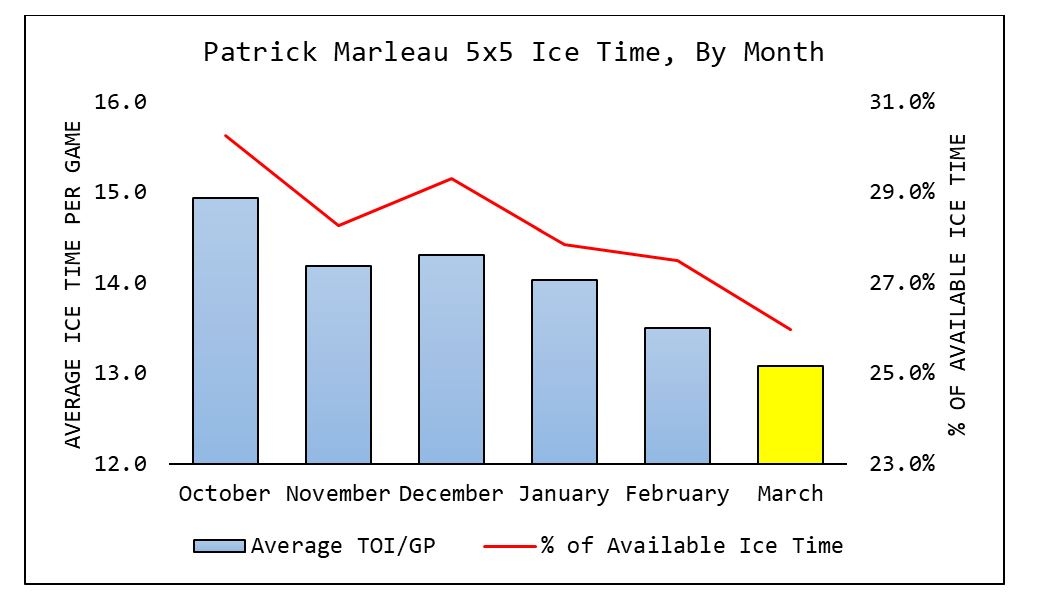 I think this is the type of change that benefits both the team and Marleau as they prepare for a postseason run. More recently, Marleau has been lining up in a true bottom-six role, playing the majority of his minutes with Nazem Kadri and one of Kasperi Kapanen or Connor Brown. That’s a bit different than Toronto’s regular-season opener, where Marleau was tagged up with superstar Auston Matthews.

The decision to flex Marleau’s minutes down carries with it some well-deserved promotions. Zach Hyman and Andreas Johnsson have continued to establish themselves as top-six regulars in Toronto, and it’s created some of the deepest forward line combinations that any team in the NHL can offer.

That’s good news for Toronto, but they’ll need all of the help they can get. Regardless of what Toronto does internally, the road to the Stanley Cup still cuts through Boston and Tampa Bay.