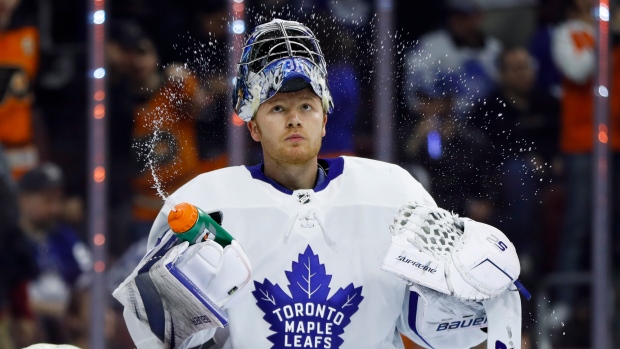 Frederik Andersen cools off after giving up a goal to Radko Gudas on Wednesday. , The Canadian Press

TSN Toronto reporter Mark Masters checks in daily with news and notes on the Maple Leafs, who practised at MasterCard Centre on Friday before flying to Ottawa for Saturday’s game against the Senators.

Frederik Andersen is finally getting a rest. It will be Garret Sparks starting on Saturday in Ottawa making this only the second time all season – outside of the back-to-back situations​ – that a healthy Andersen has not been in net for Toronto.

"He's got a good break this week to recharge and get himself going and get his focus the way he wants," head coach Mike Babcock said.

Andersen has struggled mightily this month posting an .890 save percentage in 11 games.

"You learn from it," Andersen said, "and I've been through it before and come out really good again and I'm sure I will again so that's a positive thing. When you do go through those stretches it feels like the world is falling apart, but you don’t necessarily lose your talent or anything like that so you’re​ better off when you come out of it. And it adds to your confidence once you finally work your way out of it."

Leafs players showed no mercy to this mannequin during practice. VIDEO @ https://t.co/0i9St2RY1O pic.twitter.com/EKJmctgSUE

Andersen will now have four full days off between starts, making this his longest break since the bye week. With the jam-packed schedule it's hard to find a lot of practice time so this is a valuable chance for Andersen to dial in on certain things. On Friday, goalie coach Steve Briere brought out his mannequins for the first time in a while helping Andersen work on fighting through screens.

"It's good," he said. "Obviously, playoff time there's going to be a lot of guys going to the net, a lot of big bodies so it's a good way of working on that stuff without hurting guys in practice."

The mannequins were attached to strings allowing Briere to simulate moving screens similar to the ones that led to the Radko Gudas goal in Wednesday’s 5-4 shootout loss to the Flyers in Philadelphia.

"That’s a good example of it, where there's lot of bodies crossing each way and sometimes you might not be able to pick up the puck until the last second or only see the first part of the shot so that’s another good way of training," Andersen noted.

And while the extra practice time is nice, Andersen believes his struggle right now is more mental. He insists that he felt good despite allowing four goals on 44 shots against the Flyers and also felt similarly positive about his recent practice sessions.

"You don't really get worse in those stretches where you don't feel things are going your way and it’s a hard thing to do, but you got to remember what kind of talent you have and what level you're capable of playing and you really just try to get back to that," he said. "And that’s the challenge."

Maintaining a positive attitude is key.

"It’s important for everybody in life," said Babcock. "You’re not getting any better if you’re sucking the life out of yourself. The sun got up today and so did we; let’s get at ‘er. To me, you go through ebbs and flows in the year ... If you think you can be good at what you're doing when you're not feeling good, it's impossible so, you know, your mental health's a huge part of the game and feeling good and being confident."

On more than one occasion on Friday Andersen made reference to the Toronto market and the need to tune out the white noise.

"Especially in this type of market, where everyone loves to give their opinion on how people should be playing, it’s very important to focus on what you can control," he said.

As for the unending discussion about how much he should play in the remaining games, Andersen says it’s a balance between rest and rhythm.

"You need both. You need to be fresh, but you also need to be feeling like you’re not sitting for two weeks so that’s the important thing."

Friday's practice focused on special teams and Babcock used the opportunity to try out some different power-play alignments. Here's how they practiced, with the number of power-play points they have this season in brackets beside each player:

For most of the year the top unit has been stacked with Rielly, Matthews, Kadri, Marner and Tavares so this is a more balanced approach. The changes also saw Tavares move from the net-front role to the flank while Hyman got a rare opportunity on the man advantage.

"All we're trying to do is make sure we have a good option, especially if things don't work," Babcock said. "Our power play's been pretty good. Obviously, the harder we work on it the more success it has."

Toronto scored on the man advantage in seven straight games to start the season, but has been in the middle of the pack in the NHL since then and the coaching staff had considered shaking things up for a while.

"We've talked about it quite a bit, but we had different guys not available at certain times and so we haven't done it," Babcock revealed. "This gave us a good opportunity here today with us focusing on power play and penalty kill to have a look at it. With a few games left we'll try it a few times for sure. That doesn't mean we won't go back to the way things were, but we'll try it for sure."

Toronto is currently in a dry stretch having gone 1-for-14 in the last five games while failing to seize a huge chance in the final two minutes of regulation against the Flyers.

TSN's Kristen Shilton has more on the changes here.

After practising with his teammates on Thursday, Jake Gardiner worked out on his own today.

"No setback or nothing," Babcock said. "We just weren't doing enough today for Gardiner to get any work in the deal so we put him on with someone else and he'll skate with us tomorrow."

On Thursday, Babcock noted it would be "ideal" if the defenceman, who hasn't played since Feb. 25 due to a back injury, could return for a regular season game. On Friday, he went a bit further.

"I just talked to Jake here a few minutes ago and just asked how he's doing and he said, 'Really good,' so that's positive. He said to me he felt like he had no quick twitch yesterday, you haven't been on with the guys in a long time so that's natural, we'll work hard on getting that up to speed for him prior to him getting into a game. I would like to see him in two games, the last two games, ideally before he starts (the playoffs). I don't know if that means we have to dress seven D one night or whatever we got to do, but just to get ourselves set up and to give him the best opportunity. He's an important, important, important player for our team and we'd like to have him healthy."

With Gardiner and Travis Dermott sidelined, Babcock has leaned heavily on his top-four defencemen during this recent stretch.

Dermott is expected to return from a shoulder injury on Saturday in Ottawa while Calle Rosen is likely to be called up following the Toronto Marlies game Friday in Utica, which should help Babcock spread the minutes around more.

"Obviously, the injuries we've had put more onus on (Muzzin), Ries, Z and Hains and they probably played too many minutes this last while," Babcock admitted.

The warm-up routine employed by Tavares is something that has stood out to his new teammates in Toronto.

"He's so detail-oriented," gushed Hyman after Tavares potted four against the Panthers on Monday. "Seeing how long he prepares before he goes out on the ice, he has a routine and he follows it (smiles). I don't know exactly what it is, but it works, obviously."

Walking into every game, even at home, Tavares almost always has his trusty knapsack. Is that tied to the routine?

"Yeah," Tavares said with a grin. "I think a lot has been made of the knapsack this year, the backpack, and there's a few things in there, but I wouldn't say it's (all workout) stuff. I got my iPad in there and a few other things I just bring on the road that's just part of my stuff. But I have some items that are part of my pre-game routine or help me prepare."

"I got some electrolytes, some vitamins in there," he said. "It's really nothing too complicated."

With the cameras always rolling, some players like to make a fashion statement when walking into games so, no surprise, Tavares does take some ribbing from teammates.

"It's not the best style in the world," said Kasperi Kapanen, "but it works for him. The guy has got 45 tucks this year so just keep doing you."

"I want to go out there and play well so if I have to sacrifice a little bit of fashion I got to do what I got do," Tavares said with a smile. "Actually, Mark Streit, back in my first few years in Long Island, used to give me a hard time. He goes, 'If you're going to have one at least get a nice backpack!' So, I made sure to do that going forward."

Kapanen is in the middle of his worst goal drought of the season having gone 11 games between tallies. He's had some chances, but has been unable to convert since a game against Buffalo way back on Feb. 25 and it seems to be wearing on him a bit. Early in the second period on Wednesday, Kapanen was spotted on camera mouthing the words, "I can't score."

"I didn't really take it too seriously when I said that," Kapanen insisted. "Right now, it's tough. It's not going in, it's not bouncing in, but that's the way it is sometimes and I feel like our line's been playing pretty solid of late."

Kapanen has 19 shots on net in five games since returning from a concussion, producing just one assist in the process. He insists he's feeling no rust associated with the injury.

"It was fine," he said of his return. "I felt fine. Obviously, a harder game against Nashville (in his first game back), but I felt I was able to skate and pick up the pace and I feel great. I'm 100 per cent."

The snake-bitten stretch means Kapanen has been stuck on 19 goals on the season. Is the number 20 meaningful to him?