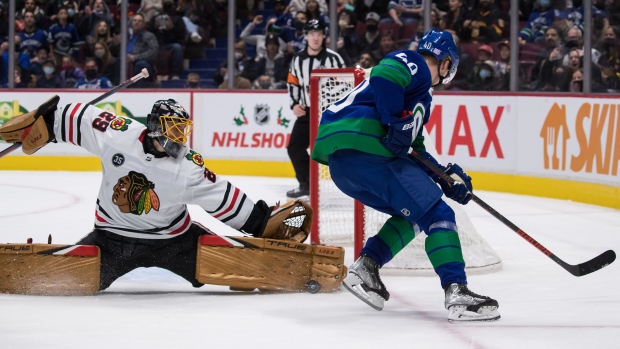 VANCOUVER — Frustration mounted for the Vancouver Canucks Sunday as yet another game slipped away.

After dominating play through the first two periods, the Canucks gave up a goal early in the third en route to a 1-0 loss to the Chicago Blackhawks.

Vancouver has won just one of its last seven outings.

“I’m pretty frustrated right now. We need to mentally be tough right now and keep bringing our game like we’ve been talking about for the last little while," said forward J.T. Miller. "It’s going to come, I think. We’ve just got to be mentally strong.”

The Canucks (6-11-2) were facing a Blackhawks (6-10-2) team that was coming off a 5-2 loss to the Oilers in Edmonton on Saturday. Vancouver, meanwhile, beat the Winnipeg Jets 3-2 at home on Friday and was looking to post consecutive victories for just the second time this season.

A hot goalie was the difference maker Sunday. Marc-Andre Fleury stopped all 40 shots he faced to collect his first shutout in a Blackhawks jersey.

“It was a close game all night and playing on road, the guys play last night so it's not easy for them to keep pushing, to have that energy to compete for 60 minutes the way we can, the way we want to," he said. "They hung in there, they skate hard, they help me out around the net with rebounds and stuff and blocked some shots. It's very satisfying to get to that win here.”

Brandon Hagel scored the game's lone goal with a third-period tip in.

Thatcher Demko stopped 23-of-24 shots for the Canucks.

Vancouver head coach Travis Green said he was frustrated with the result but not disappointed in how his group played.

The Canucks got a late chance after Chicago's Jake McCabe was called for interference on Tanner Pearson with just over two minutes left on the clock.

Vancouver peppered Fleury of shots and poured on the pressure with just 90 seconds to go, pulling Demko in favour of an extra attacker, but the veteran netminder made six saves and weathered the barrage.

Chicago was "selling out" to kill off the penalty, said Miller.

“They were getting up for the blocks. That’s a big part of penalty killing," he said. "There’s not a whole lot to change, really. Just bear down on our chances, a little more 'oomph' behind the puck when we get it in the scoring area.”

The Canucks were 0 for 3 on the man advantage Sunday.

Vancouver dominated play through much of the first two periods, outshooting the visitors 30-13, but couldn't find the back of the net.

Hagel finally broke the scoreless deadlock 4:12 into the third, tipping in a long shot from Erik Gustafsson for his fifth goal of the season.

“(Chicago) probably found their legs in the third there. That’s tough," said Conor Garland. "You let a team hang around there, that’s your biggest worry in back to backs. They found their legs and they pushed there.”

Several Canucks rang shots off the metal, including Pearson, who nearly evened the score midway through the third.

Late in the second, Garland sliced a crisp pass to Vasily Podkolzin as he crashed the net, only to see the Russian rookie's shot ping off the post.

Fleury said he "definitely" had some help from his posts in earning his 68th career shutout.

"I'll buy them dinner, or maybe fresh paint maybe, just treat them a bit. They were good to me. I think they had like four or five posts all night," said the veteran netminder, who improved his recent record against Vancouver to 13-0-2.

"It's fun, though. It’s a challenge and if I can keep the game close I always believe we can get some goals and we did get a huge one there in the third.”

Garland had a prime scoring opportunity midway through the opening frame, too. The feisty forward went one-on-one with McCabe and pulled a spin move in tight but his backhand shot glanced off Fleury's pad.

Dylan Strome nearly opened the scoring for Chicago with about four minutes to go in the first after Miller turned a puck over in front of the Canucks' crease. Strome picked it up and blasted a shot off, narrowly missing the far post.

Vancouver managed a minor milestone Sunday as it killed off three penalties. The team came into the game with the league's worst penalty kill at 60.3 per cent.

The Canucks will kick off a five-game road trip Wednesday when they face the Penguins in Pittsburgh. The Blackhawks visit the Flames in Calgary on Tuesday.

NOTES: It was the second time the two sides met this season after Vancouver took a 4-1 decision in Chicago on Oct. 21. … Blackhawks defenceman Seth Jones saw his eight-game point streak come to an end. He had two goals and six assists across the stretch. … The Canucks haven't won consecutive games since Oct. 23.

This report by The Canadian Press was first published Nov. 21, 2021.