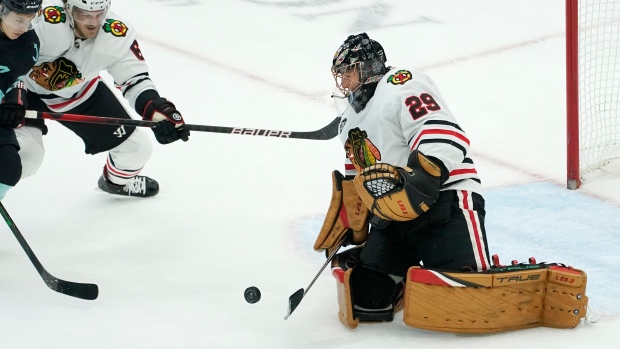 Marc-Andre Fleury's future appears to be in his own hands.

TSN Hockey Insider Darren Dreger reports Fleury won't be traded unless he requests a move from the Chicago Blackhawks ahead of the trade deadline.

"For a number of reasons, there’s lots of speculation surrounding [goaltender] Marc-Andre Fleury and the Chicago Blackhawks," Dreger said on Insider Trading Thursday. "He won’t be a fit in Edmonton, primarily for financial reasons, but Fleury was asked about trade possibilities, and he said, 'I’m not thinking about that right now, I’m just trying to inch the Chicago Blackhawks closer to a playoff spot.'

"But there will be a conversation between the veteran goaltender and his agent, Alan Walsh, and that will extend to the Blackhawks management. There’s also an agreement with the Blackhawks that Fleury isn’t going anywhere unless he wants to.

"Again, pump the brakes here. We’re in the better part of two months away from the March 21 trade deadline. If in six weeks from now Fleury says that he wants to chase the Stanley Cup? Well, that’s a different story and there will be interest."

Fleury, the reigning Vezina Trophy winner, was traded to the Blackhawks in the off-season from the Vegas Golden Knights. He has a 13-11-3 record this season with a .916 save percentage and a 2.69 goals-against average.

The 37-year-old is a pending unrestricted free agent, carrying a cap hit of $7 million in the final season of a three-year deal signed with Vegas in 2018.

A three-time Stanley Cup champion, Fleury has reached the playoffs in 15 straight seasons and sits fourth all-time in career playoff wins - two back of Grant Fuhr at 92.

Chicago currently sits eight points back of the San Jose Sharks for the final wild-card spot in the Western Conference with two games in hand and five teams sandwiched between the two teams.