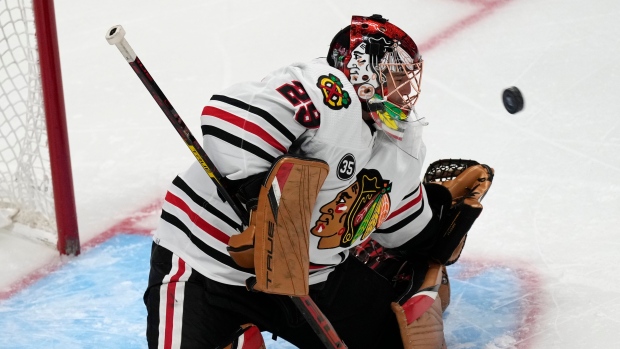 The Chicago Blackhawks have traded goaltender Marc-Andre Fleury to the Minnesota Wild for a conditional first-round pick, it was announced Monday.

The 37-year-old has played in 18 NHL seasons with the Blackhawks, Pittsburgh Penguins and Vegas Golden Knights, winning three Stanley Cups with the Penguins in 2009, 2016 and 2017 and leading the Golden Knights to the Cup Final in 2018.

He won the Vezina and Jennings trophies last season and was traded to the Blackhawks last summer.

With a 2-0 win over the Montreal Canadiens on Dec. 9, Fleury joined Martin Brodeur and Patrick Roy as the only NHL goaltenders to reach 500 career wins.

Drafted first overall by the Penguins in 2003, he carries a $7 million cap hit this season and will become an unrestricted free agent this summer.

“This trade immediately puts us in a better position at the 2022 NHL Entry Draft, giving us a pick that will land early in the draft,” said Blackhawks general manager Kyle Davidson in a news release. “We are in a better position today at the upcoming Draft than we were yesterday. In a short time with the Blackhawks, Marc-Andre made quite an impression on our fanbase and in our locker room. We appreciate his willingness to work with us on finding a deal that worked for everyone. The Blackhawks wish him and his family the best in Minnesota.”