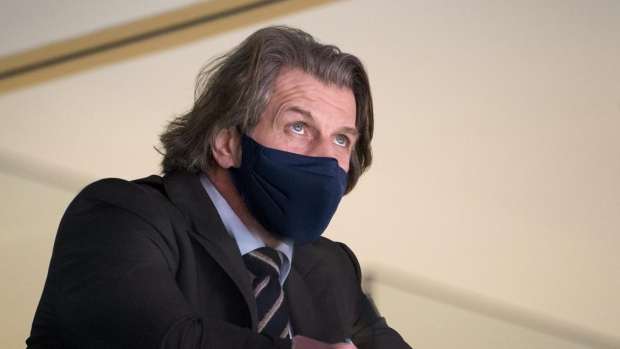 Marc Bergevin's contract with the Montreal Canadiens expires at the end of the current season, but would he like to stay on longer?

The Canadiens general manager spoke at an impromptu media availability on Wednesday afternoon, a day after the Habs were shutout 5-0 by the San Jose Sharks to fall to 0-4 on the season.

Marc Bergevin says he'd like to stay on as Habs GM beyond the expiry of his contract at the end of the season: "In a perfect world, yeah."

Though he acknowledged that his team looked "tight" after falling behind the Sharks early, he doesn't think it's time for the Canadiens to look to make any roster moves just for the sake of making a change.

"Montreal is a different market," he told reporters. "The fans are passionate, you guys have your job...we're a team, I'm part of the team, and I thought it was important to address you today with what's happening. Nothing more to it than that."

Marc Bergevin, speaking at an impromptu availability with Montreal reporters after his team's 0-4 start, says he won't make a roster change just for the sake of making a change.

Bergevin also gave a brief update on injured captain Shea Weber, who will not play this season as he recuperates from a number of lower-body injuries and might not play again.

#Habs Bergevin also says he has a plan for Weber and will disclose details if it materializes.

Bergevin was cryptic, so perhaps he’s inferring hockey ops or coaching because MB says it’s a “long shot” for Weber to resume playing.

Bergevin said that while Weber has continued his rehab, he wasn't close to resuming anything near his normal activities and it was a "long shot" for the 35-year-old defenceman to resume his career.

Next up for the Habs on the ice is the return of Jesperi Kotkaniemi to Montreal and a visit from the Carolina Hurricanes on Thursday night.