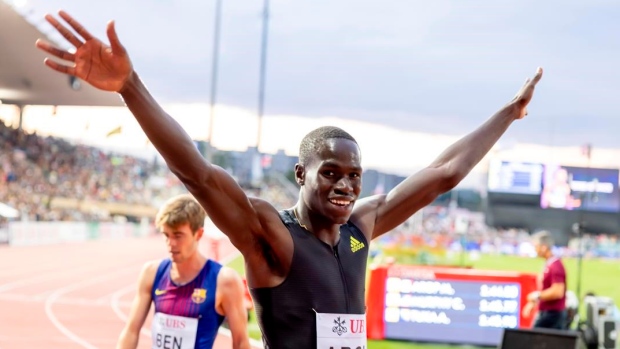 Marco Arop once dreamed of playing in the NBA.

"He would play the whole game and just never get tired. He would never ask for a sub, he would never need a water break. He could just run and run and run," Wojcicki said.

Flash forward five years and Arop has been one of the most dominant 800-metre runners on the planet this summer. The 22-year-old will be a favourite in Thursday's Diamond League Final in Zurich. He's climbed the podium in every Diamond League event in which he's raced this summer — remarkable consistency for an athlete relatively new to the sport.

"I had no idea that Marco was going to be this good at track," Wojcicki said.

Canada's Olympic 200-metre champion Andre De Grasse will race both the 100 and 200 in Zurich. Winners of each event get US$30,000, a diamond trophy, and an automatic berth in the 2022 world championships.

Arop will be one to watch in the run-up both to next summer's worlds in Eugene, Ore., and the 2024 Paris Olympics after climbing the global ranks at breakneck speed.

Arop and his family escaped war-torn Sudan when he was just three, living for a few years in Egypt before moving to Edmonton, where he grew up with five brothers.

Arop was initially considering a basketball scholarship offer from Concordia University of Edmonton, when Wojcicki — who, like so many high school coaches, laughingly said he recruits anyone "with a pulse" to run track — convinced him to come out for St. Oscar Romero's track team.

"I was really impressed by his fluid stride," Thompson said. "He was six foot four, that's another asset that I was enticed by … and he was so smooth in his stride pattern."

Thompson watched as Arop ran two minutes four seconds and won that first meet. With a few adjustments to his pacing, Arop slashed four seconds off his time in his next race. And then another couple of seconds. And another. He won silver at the provincial championships in 1:55 — Thompson said could have won gold if he hadn't been boxed in. He earned a scholarship to Mississippi State University.

Arop was in the stands watching Brandon McBride win the national title in Edmonton. The following year, he gave McBride a run for his money, finishing second. The year after that, Arop led wire-to-wire to beat McBride, the Canadian record-holder in the event, at the 2018 national championships.

The powerful Arop is a sight to behold on the track. He dwarfs his competition — much like his idol David Rudisha, the six-foot-two world record-holder from Kenya.

"David Rudisha was in Doha at the world championships (in 2019) watching the race, and he turned to Marco's agent and said, 'Who's that? He looks like me," Thompson said.

Arop ran a personal best 1:43.26 in July, just 0.06 shy of McBride's Canadian record. On a recent Zoom call with coach Chris Woods and Wojcicki, he stated that his goal is to break Rudisha's world record of 1:40.91, and win gold at the Paris Olympics.

"He just like said that so nonchalantly, and not in an arrogant way," said Wojcicki, who left teaching for the financial world, and is now Arop's business manager.

In another parallel to De Grasse, Arop is fearless on the track. He's unfazed by who's lining up in the lanes beside him, and what accolades they might have. That was evident when he beat basically the entire Tokyo Olympic final field to win recent back-to-back Diamond League meets. There's a sense of innocence around his talent.

"He was like that in basketball too," Wojcicki said. "He was really quiet. Obviously you want guys to be loud on a basketball court and Marco just wasn’t, but he was never fazed, was never intimidated. We were a Division 2 or 3 program but played Division 1 in the spring league, and Marco would dunk on guys like it was no big deal. He didn't care about anybody else.

"He also had an amazing work ethic, like it was unreal."

Thompson called the soft-spoken Arop "one of the sweetest kids you want to meet, extremely, extremely nice.

"I remember during the Paris Diamond League, the British commentator was saying he had a chance to speak with Marco, and he was a wonderful human being," Thompson said.

"That's a big compliment, even more than his talent."

After his recent gruelling three races in eight days, Arop skipped the Diamond League stop in Brussels to focus on Thursday's finale. He's still learning how to pace the 800, which was evident at the Olympics. He led wire-to-wire to win his heat in Tokyo, but faded badly in the semifinals and didn't qualify for the final.

He changed tactics after that, and at the Prefontaine Classic on Aug. 21, he stayed at the back of the pack before taking the lead with 300 metres to go to win. He won five days later in Lausanne, Switzerland, holding off Olympic champion Emmanuel Korir down the home stretch.

Arop isn't the only Canadian track star who arrived relatively late to the sport from basketball. De Grasse was a promising young player who battled eventual No. 1 draft pick Andrew Wiggins as a youngster. And Damian Warner, who captured decathlon gold at the Tokyo Olympics, played basketball through high school.