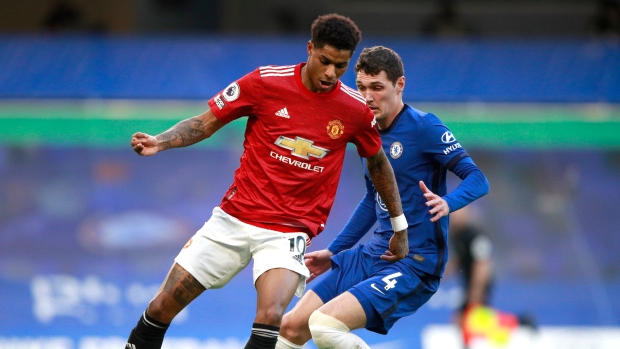 Marcus Rashford's return to the Manchester United squad is picking up pace.

The 23-year-old England forward was a full participant at Red Devils training on Friday for the first time since undergoing shoulder surgery in August.

"Marcus trained fully for the first time today with contact," United manager Ole Gunnar Solskjaer said at his briefing prior to his team's meeting with Everton on Saturday. "There were a few tackles flying in on him but he seemed okay, which was nice to see."

A product of the United academy, Rashford is heading into his seventh season with the senior side. In 57 appearances across all competitions last season, he had 21 goals.

Capped 46 times by England, Rashford was a member of the Three Lions squad that reached last summer's Euro 2020 final.

Solskjaer also used his press conference to criticize the league's scheduling, wondering why both United and Chelsea were forced to play on Saturday, despite playing in the Champions League this past Wednesday.

"We had no explanation, but it's TV of course," Solskjaer said. "There's no common sense at all. We had the same scenario last season when we were in Turkey and came back and played. Us and Chelsea both played on Wednesday and could have easily played on Sunday while [Manchester] City-Liverpool [whose respective Champions League games were on Tuesday] could have been on Saturday. Common sense might not be so common."

Through six matches, United sits fourth in the Premier League table, one point back of leaders Liverpool.