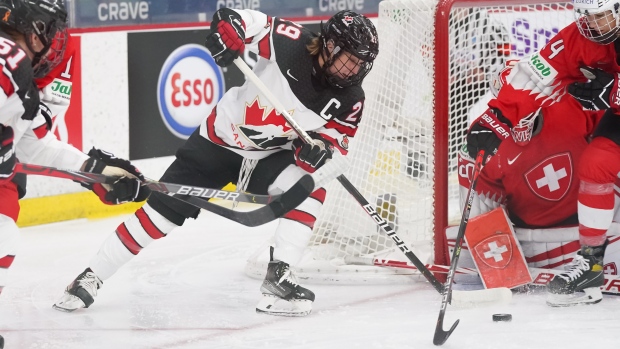 Canadian captain Marie-Philip Poulin will have a few days off after taking a puck to the neck in Tuesday’s game against Switzerland, Hockey Canada's director of national women's teams Gina Kingsbury announced on Wednesday.

Hockey Canada confirmed late on Wednesday night that Poulin would sit out Thursday's Group A game against the United States.

Gina Kingsbury, who runs Canada's senior women's hockey team, says in a brief media statement on Zoom that captain Marie-Philip Poulin will have a few days off after taking a puck to the neck yesterday…to me, that implies Poulin will not dress vs the United States tomorrow.

Canada and the U.S. are both 3-0 and the winner of their game will take first place in Group A ahead of Saturday's quarterfinals.

Poulin left the game against Switzerland in the third period after getting hit with the puck while attempting to block a shot on the penalty kill.

The 30-year-old has a goal and two assists in three games for the undefeated Canadians.