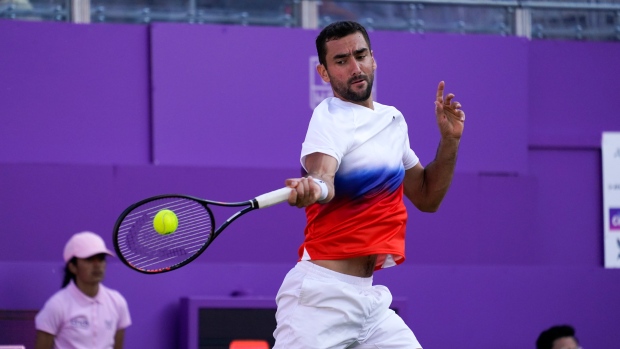 LONDON (AP) — Former Wimbledon runner-up Marin Cilic kept his focus to beat Alexander Bublik 7-6 (6), 7-5 and advance to the quarterfinals of the Queen’s Club on Wednesday.

The seventh-seeded Cilic, a two-time Queen’s champion making his 15th appearance at the tournament, saved three set points after trailing 5-0 in the first-set tiebreaker.

Bublik fell behind 3-0 in the second set and used an array of underarm serves and drop shots to get back on serve. But his second double fault in the last game set up match point for his Croatian opponent, who earned his 34th victory at Queen's.

“The game plan against Alexander is to keep focus, you never know what is coming,” said Cilic, a finalist at Wimbledon in 2017. “He made it a little bit crazy in that second set and out of nowhere started to do these underarms serves and slices and drop shots, and just breaking up the rhythm.”

Paul will face Stan Wawrinka in the second round.