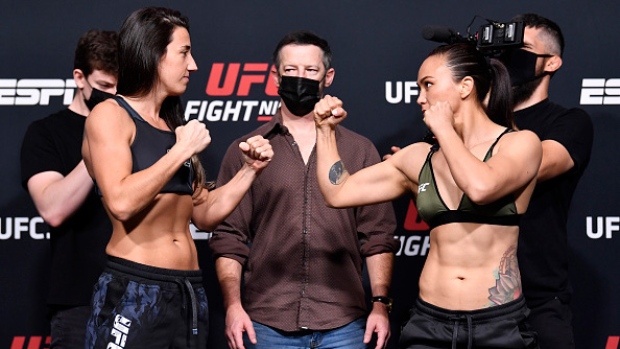 A pair of strawweight contenders will move up to flyweight and into the main event spotlight as Marina Rodriguez faces Michelle Waterson in Saturday’s headline bout.

After the card’s original main event bout of Cory Sandhagen vs. T.J. Dillashaw was moved to a later card due to an injury, Rodriguez and Waterson were tabbed to close the show, but at a higher weight than they usually fight at due to the short notice nature of the bout.

The new main event was not officially announced until Tuesday of fight week.

Rodriguez enters the bout off a victory over Amanda Ribas at UFC 257 in January.

The win came after her first professional loss, which she suffered at the hands of former strawweight champion Carla Esparza.

The 34-year-old was undefeated in her first 14 fights, racking up 12 wins and two draws, including a 2-0-2 mark in her first four UFC outings.

Rodriguez, the No. 6-ranked strawweight, earned her place in the promotion with a victory over Maria de Oliveira Neta on Dana White's Contender Series Brazil.

Waterson also got back in the win column in her last outing, earning a split decision victory over Angela Hill in the main event of Fight Night last September at the UFC Apex.

The 35-year-old stopped a two-fight losing streak with that victory after losses to Joanna Jędrzejczyk and Esparza.

Waterson will give up some size to her opponent on Saturday night, but nothing she hasn’t seen before in her 26-fight professional career.

"I’ve faced the best strikers in the world, I’m not afraid of her striking,” Waterson told TSN. “I’ve faced bigger girls, Cortney Casey, Joanna, these girls are the biggest and the baddest. We’ve been there and done that.”

Waterson is currently ranked ninth in the strawweight division.

For the first time since September, the UFC’s winningest fighter returns to the Octagon, trying to snap a five-fight winless streak.

Donald “Cowboy” Cerrone will be in action for the first time since his no-contest against Niko Price, when he faces Alex Morono in the co-main event.

He was originally slated to fight veteran Diego Sanchez but his opponent was removed from the bout and subsequently released from the promotion.

Prior to the no-contest fight with Price, that was originally a majority draw, Cerrone had dropped fights to Tony Ferguson, Justin Gaethje, Conor McGregor and Anthony Pettis.

The 38-year-old holds the UFC wins record with 23 victories and also the mark for most performance bonuses (18) and is tied for the most finishes in the promotion (16).

He last added to that promotional wins record in May of 2019 when he scored a unanimous decision victory over Al Iaquinta.

Morono, who took the fight on five days notice, dropped his last bout to Anthony Pettis at a Fight Night card last December in Las Vegas.

The 30-year-old has a 7-4 record with one no-contest since joining the UFC, including his most recent win over Rhys McKee last November.

Amanda Ribas and Angela Hill will also meet on Saturday’s card in a bout in the strawweight division.