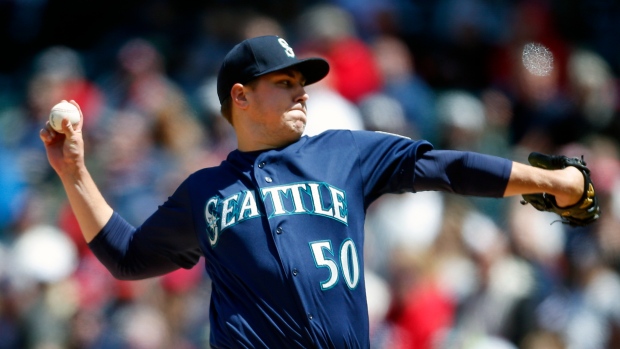 NEW YORK (AP) — Seattle Mariners reliever Erik Swanson was placed on the 15-day injured list Saturday with right elbow inflammation, leaving the team without one of its top arms in the bullpen.

Swanson has a 1.29 ERA over 13 appearances, with 21 strikeouts and only one walk in 14 innings — by far the most success he's enjoyed in four major league seasons, all with Seattle.

“Not ideal. He's been throwing the ball so well. He's really been awesome. It's the best we've seen, the best version we've seen of Erik Swanson, and a lot of it's had to do with the development of his secondary pitches,” manager Scott Servais said. "We're going to miss him. He's off to a great start for us."

To fill his spot, the Mariners recalled left-hander Danny Young from Triple-A Tacoma before Saturday night's game against the New York Mets. Young had just been optioned to Tacoma in a flurry of eight roster moves made by Seattle ahead of the series opener Friday.

In another transaction Saturday, the Mariners acquired infielder Alex Blandino and cash from the San Francisco Giants for outfielder Stuart Fairchild, who was optioned to Tacoma and designated for assignment Friday.

Swanson had an MRI in Seattle a few days ago, before the club headed out on its road trip.

“Swanny's having some discomfort on the back side of his elbow,” Servais said. “It's not the ligament. Nerve irritation I guess is the best way to put it. It's something that — he tried to play catch with it a little bit yesterday, he probably wants to give it a few more days. I mean, don't know how much we're going to end up relying on our bullpen, so we want to make sure we have a full cast of characters down there to go to if we need to. So giving him a little blow is what we're going to do right now.”

Young, 27, made his major league debut with 2 1/3 scoreless innings Monday against Philadelphia. He allowed three hits and a walk while striking out three.

The 29-year-old Blandino was batting .183 with one home run, five doubles and nine RBIs in 24 games at Triple-A Sacramento. He was drafted 29th overall by Cincinnati in 2014 out of Stanford and made his big league debut with the Reds in April 2018.

Blandino is a .226 career hitter in 135 major league games with two homers and 16 RBIs.

The 26-year-old Fairchild, a Seattle native, will report to Triple-A, the Giants said.