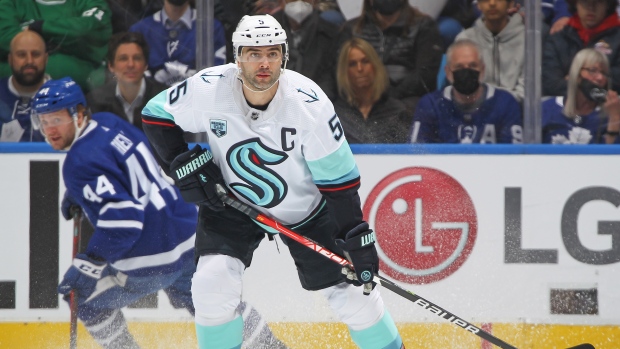 Mark Giordano lists Toronto's run to the 1993 Western Conference Final as his favourite memory growing up as a Leafs fan.

"I really thought that they were going to get to the Cup that year against the Montreal Canadiens, but Wayne Gretzky spoiled those plans," Giordano said in a Zoom call with reporters.

Now, Giordano gets his chance to help his hometown team get over the hump.

"It means a lot," the 38-year-old defenceman said. "It's funny, you know, I turned pro and got into Calgary and you sort of hope the Leafs don't win because you're jealous of your hometown team winning the Cup. Now that I'm able to get back to Toronto and be a part of it, it's a great opportunity for myself to be a part of something special."

"I had a great experience in Seattle," said Giordano, who was the franchise's first captain. "I want to make sure I mention how great the organization treated me right to the end. I had a great relationship with [general manager Ron Francis] and he knew I was from Toronto and this would be a great fit. For him to put me in a spot like this means a lot."

Toronto scored 12 goals in a pair of recent wins over the Kraken, which gave Giordano a taste of what his new team is capable of.

"You can see the skill on the team is right up there with anyone in the league," said Giordano.

Giordano described playing at home as "a huge bonus" but made it clear his No. 1 objective is chasing down an elusive championship. He's only suited up in 23 Stanley Cup playoff games since breaking into the league during the 2005-06 season.

Giordano, who sat out Seattle's last two games, is hoping to make his Leafs debut on Wednesday against the New Jersey Devils, but noted that decision will be left to the coaching staff.

"Sitting out waiting for the trade deadline wasn't the funnest thing so I'm looking forward to playing in a game again," he said.

Giordano has worn No. 5, but that number is retired in Toronto thanks to Bill Barilko.

"I'll stick to something with a five in it," Giordano said. "Hopefully 55 is available or something like that."

---
Giordano was inundated with messages after the news broke on Sunday.

"I've only gotten through about 10 to 20 text messages and, I'll tell you, I have a ton more to get to," he said with a smile. "I'm not sure I'll get through them all before the end of the month."

Some of those messages were from Leafs defenceman T.J. Brodie, who was his teammate in Calgary for the better part of a decade.

"Can't wait to see Brods again. Can't wait to play on the same team as him again. We're great buddies off the ice."

Brodie was Giordano's defence partner for much of his time in Calgary, including when he produced 74 points in the 2018-19 season and won the Norris Trophy.

"Brods doesn't get enough credit or hasn't gotten enough credit in his career for how good he is," Giordano said. "I don't know if you guys have noticed, but he makes every partner he plays with look really good and that was the case for a bunch of years when I played with him. He's a guy who can break the puck out by himself and in the O-zone he has really great deception. I really loved playing with him, because he would fake two or three guys out and then slide the puck over to me and I'd have all day to walk into a shot. We were pretty comfortable with each other. He's a more lead-the-rush guy and I'm more of a guy who can jump into the rush and jump into spots. We worked well together."

Brodie has been working his magic alongside Justin Holl of late. Whether he's reunited on a pairing with Brodie or not, Giordano likes the look of the Leafs blue line, which is headlined by Morgan Rielly.

"It's a deep group," Giordano said. "It's a group that has a lot of guys that have different skill-sets, which is important. Some guys can play more physical and then you got a good mix of puck-moving guys. Mo and Brods are really elite puck movers and skaters ... [Rasmus] Sandin and [Timothy] Liljegren, two young guys with a ton of upside and poise. I'm looking forward to finding my spot in the group. When you have a deep D core it really can translate to success. You see it every year in playoffs and I think we really have that."

---
The undrafted Giordano is quick to point out that he doesn't have as many miles on the odometer as you may think.

"I feel great," he said. "I just played 1,000 games and most 38-year-old guys would've played more games by now. I started and developed later in my career and, yeah, physically I feel good. I try and work and keep my speed all the time. That's the No. 1 thing you worry about as you get older, but I feel really good physically."

Blackwell, a 28-year-old from Massachusetts, also had a slow start to his NHL career.

"I took two years off from bad injuries back in college and missed a lot of time and it kind of set me back," the Harvard product said. "Started off in the minors and had to climb my way up through PTOs."

Blackwell, a seventh-round pick by the San Jose Sharks in 2011, finally broke into the NHL with the Nashville Predators during the 2018-19 season. He has played 119 games with three teams.
"Over the last couple years I've been able to slowly, more and more, get a little bit more of an opportunity and try and prove and show what I'm capable of doing and be a Swiss Army knife and play in a lot of different positions. Definitely a late bloomer and I still think I have a lot left in the tank. I'm looking forward to bringing that and playing with a chip on my shoulder for the rest of the year."

Blackwell suited up with Leafs forward Alex Kerfoot at Harvard and the pair remain close friends. Kerfoot, in fact, was the first person to reach out after the trade news broke.
The initial reaction?

"Talk about excitement," Blackwell gushed, "going to a place a little bit closer to home and an honest opportunity to be a part of something special and play in the playoffs and compete for a Stanley Cup, I mean, that's something somebody in my situation, it's all you can really ever ask for."

Blackwell believes he'll fit in well with the Leafs because he brings something a little bit different to the group.

"A ton of firepower up front," he observed of the roster. "The top two lines are just stacked and you got a lot of puck-moving defencemen. A guy like me doesn't necessarily play that style, but ... the simplicity of my game can bring something to this lineup. [I can] just be that energy bug that can play any position they want me to and help out any way."

---
The Leafs also added a goalie on Sunday by signing KHL standout Harri Sateri, who will need to clear waivers before joining the team. Sateri recently helped Finland win gold at the 2022 Olympics in Beijing.

Goaltender Harri Sateri has signed with the #leafs for the remainder of the season, subject to clearing waivers. He's on the waiver wire today.

Sateri had a standout season with KHL Novosibirsk Sibir and won Olympic gold with Finland in Beijing.

Toronto's goaltending remains a big question mark as the team embarks on the stretch drive. Starter Jack Campbell has seen his save percentage crater after an excellent start to the season. He's currently sidelined with a rib injury, but started skating again on Friday.

"I would probably say it is aggressive that he would be a full participant in practice [on Monday], but it seems like he is getting himself back up and running," coach Sheldon Keefe said following Saturday's loss in Nashville.

Erik Kallgren has started the last three games, which were also his first three starts in the NHL. He won the first two, but came back to earth a bit on Saturday night allowing five goals on 33 shots.

"I felt like the other two games, but obviously you never want to let in five goals," he said. "Of course, that's not good enough, but I felt pretty good. But, obviously, the result was not good enough."

"He was good," agreed Keefe. "There were some tough saves in there for sure. I thought he did a good job for us. Five is a lot. The fourth one is probably the toughest one of all. We are right there. We are on our way back. We took a bad penalty and it ends up in our net. That is usually the way those kinds of things go. He definitely made some saves."

Joseph Woll, who started four games for the Leafs earlier in the season, recently suffered a shoulder injury while playing with the Marlies in the American Hockey League.

---
The Leafs traded defenceman Travis Dermott to the Vancouver Canucks in exchange for a third-round pick in the 2022 draft. Hours before the deal, Dermott held an emotional media availability in Nashville. The 25-year-old from Newmarket, Ont. seemed to recognize his time in Toronto was coming to an end.

"It's a dream," Dermott said with a big smile and glassy eyes. "I keep pinching myself even to this day. Like, there's no way. Like, I'm still dreaming from draft day, right. They didn't actually call my name. This was just a five-year-long dream. You try and take it for all that it is and really appreciate it."

Dermott was Toronto's second-round pick in 2015.

"It was surreal being drafted by the Leafs and all the stuff leading up to this," he said, "but you know how many guys play their entire career on the same team."

Toronto through and through 🔵

Thank you for your dedication and passion on and off the ice, Derms! pic.twitter.com/UWmuEY0YTF

Dermott predicted that big things are to come for this version of the Leafs.

"I love this group," he said. "I mean, you come in every day and there's such good energy. All the way through the lineup, there's not one guy that's bringing bad vibes and kind of hurting the squad. It's all pretty positive. Even when the media's hard on us (smile) and we maybe have lost a couple, the guys always lean on each other and I think that makes it almost better for us that you have to lean on each other more, because there is pressure from the outside. I think this group is pretty sound in being able to deal with that and they come together pretty well throughout some tough times. You see through tough times we bounce back pretty well. We've always had some of our best games after we've played some bad games. Yeah, going forward it's going to be exciting."

---
The Maple Leafs are scheduled to hold a practice at noon on Monday at the Ford Performance Centre. General manager Kyle Dubas will address the media at Scotiabank Arena following the 3 pm ET deadline.