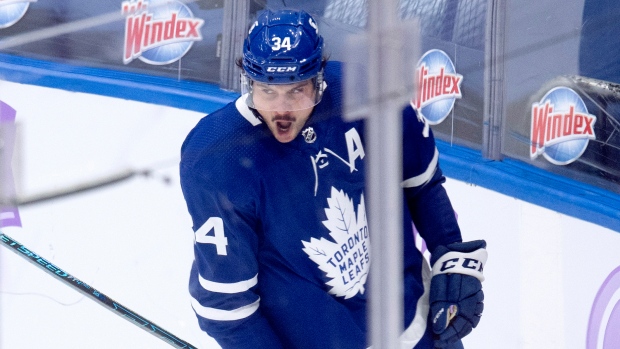 The Toronto Maple Leafs held an optional skate at Scotiabank Arena on Thursday.

Joe Thornton has seen a lot in his 23 NHL seasons, so he understands better than most just how special a year Auston Matthews is having.

"It's incredible," Thornton gushed. "What he's doing right now, what he's on pace for, this doesn't come around very often. What he’s doing is exceptional."

Matthews has 39 goals, which is eight more than Edmonton's Connor McDavid, his closest pursuer. ​Over the past 30 years, only two players had a nine-or-more goal lead at the time of his 40th goal: Alex Ovechkin in 2013-14 and Jaromir Jagr in 1996-97. ​

"I just think he's turned a switch on," Thornton said. "He's always had it in him, [it’s] just getting a couple more years under your belt. Every time he goes to play a game he expects to score and that's a good feeling to have. He's a confident guy and he's playing extremely well."

The 23-year-old centre seems to be elevating his game as the season winds down. He's scored 18 goals in his last 18 games.

"It's a sign," said defenceman Travis Dermott. "I mean, when your good guys are playing well, it makes everyone want to play better ... everyone just kind of wants to join in on that bandwagon and help in any way they can."

With only four regular-season ​games remaining and Toronto owning a comfortable six-point lead atop the North Division, Matthews' pursuit of a first career Rocket Richard Trophy has become a rallying point for the Leafs.

"When he scores, you can just sense the reaction on the bench that they're excited for him," said head coach Sheldon Keefe. "Not just because of what it means to our team and what it means to each particular game, but they know he's pursuing something and on the verge of something great. That's a factor for sure, but it's all unspoken."

With Nick Foligno sidelined with an upper-body injury, Thornton will get another look on Toronto's top line with Matthews and Mitch Marner. The 41-year-old forward has been coming on of late while playing mostly in a fourth-line role.

"I feel like I'm a chameleon," Thornton said. "I feel like I could play anywhere in the lineup. I feel real comfortable at left wing now. Obviously tonight I'm going to be playing with Auston and Mitchy, so it's a great opportunity for me. I feel good with where my game is at, it's trending in the right direction. So, put me anywhere."

Thornton has recorded a point in six straight games. If he gets on the scoresheet again tonight he will become the fourth NHL player aged 41 or older to record a seven-game point streak adding his name to an elite list that features ​Teemu Selanne, Igor Larionov and Jagr. It would also be Thornton's longest streak since the 2015-16 season.

The Leafs power play missed out on three chances Monday in Montreal.

"I didn't love how much we generated and got to the net last game," Keefe observed, "but a lot of things in our process, especially our breakouts and entries, were probably as good as they've been maybe all season."

Toronto has converted on just five of 65 chances over the past 28 games dating back to March 4, but Keefe likes how the stacked top unit featuring Matthews, Marner, John Tavares and William Nylander has fared during the last five games.

"I've seen a lot of positive progression since we put the one unit together," Keefe said. "We found ways to score or generate a lot of chances and momentum for our team. We need that to continue though, obviously, and it needs to be more dangerous. It needs to be a threat ... It certainly is on our radar, but I believe in the group and believe in the process that they've put together here recently. Of course, early on in the season, it was as good as any power play in the league."

During the past 15 games, the Leafs have gotten two or fewer power-play chances nine times.

"One of our greatest challenges with our power play has been earning opportunities," Keefe acknowledged. "That I'm a little bit concerned about and want to find ways to generate more. We got that last game, had two of them pretty much back-to-back, which wasn't ideal given that we were probably a little bit more tired than you'd like to be for the second one. I considered calling a timeout in that situation and, looking back, probably should have."

The Leafs rank 25th in power-play opportunities this season.

With Frederik Andersen returning to game action on Thursday in the American Hockey League, Keefe was asked who his Game 1 starter will be in the playoffs.

​"I don't have to make that decision here today," Keefe noted. "I don't have all the information. I'm not going to make it or make any statement on it other than to say that Fred's making his way back and Jack Campbell has been playing extremely well. His confidence is growing and our team's confidence in him is growing. I hope to have to make a difficult decision when the time comes because the one thing is really, really clear is that the strength and the depth of our goaltending has grown significantly over the last number of months and I look forward to making tough decisions."

Andersen has been sidelined since March 19 with a knee injury. Campbell has played well in his absence, but doesn't have any experience in the NHL playoffs.