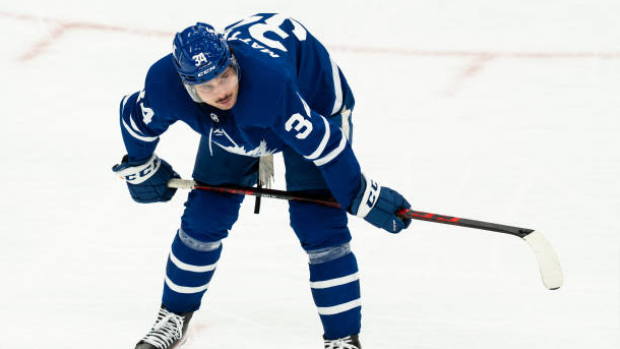 TSN Toronto Reporter Mark Masters reports on the Maple Leafs, who practised at the Gravenhurst Centennial Centre on Friday.

Auston Matthews will not play in Saturday's pre-season finale against the Ottawa Senators. The centre is still strengthening his left wrist following off-season surgery.

"Just allowing things to really strengthen to the point where he can go and play against an unfriendly opponent," explained coach Sheldon Keefe. "He's competing very hard in our practices and guys are going hard against him, but it's not the same, of course. The other part of it is, a lot of our guys have been at this for a few weeks now and so have the opponents so we [want to] give him a little more time to get up to speed. So, he's not going to play tomorrow and it will sort of be day-to-day, I guess, from there."

The Leafs open the regular season on Wednesday against the Montreal Canadiens and then play Thursday in Ottawa.

Teammates don't seem too concerned about the status of the Hart Trophy runner-up.

"He looks pretty good to me," Jason Spezza said with a laugh. "I don't know, you guys see the same practices, I think he'll be all right at some point."

Matthews has been a full participant in the last four practices.

"He looks great out there," said linemate Mitch Marner. "His skating's great. His stick-handling and finding spots in the middle of the ice has always been great. It's just nice to get out there with him and get the chemistry going again especially with [Nick] Ritchie on the line. We've done well in these practices."

Matthews even stayed out late after Friday's workout to take some faceoffs, which is something we had not seen previously.

Auston Matthews worked a bit on face-offs after practice today but … he will not play in tomorrow’s pre-season finale pic.twitter.com/aCFfGUFmFe

The Leafs wrapped up their team-bonding trip on Friday. The three-day trek to cottage country allowed some of the new Leafs to get better acquainted with their new teammates. On Thursday, the group took a boat trip on Lake Muskoka.

"It was pretty funny," Marner said. "We had a couple people who knew we were out there coming around us with their boats and doing doughnuts and stuff and skiing so it was pretty good electricity out there just watching people do stuff."

On Wednesday, the players split into foursomes to play a round of golf.

"I spent the day with Nick Ritchie in the cart," said Spezza, who played with Ritchie's brother Brett in Dallas. "He's a great guy and we had lots of laughs. He's a heck of a golfer and it was fun just riding around. He likes to talk shop a little bit. It was good. We talked a lot of hockey. He watches lots of games and he's a hockey guy."

Being a student of the game should help the Orangeville, Ont., native make a smooth transition to the Leafs lineup. With Matthews out on Saturday, Toronto's new top line won't make its game debut together until the regular season.

Matthews likes what he sees so far from Ritchie, who scored a career-high 15 goals in 56 games with the Boston Bruins last season.

"He's a really big boy [6-foot-2, 230 pounds] but he can make plays," Matthews observed earlier this week. "It's really impressive, like, forehand, backhand, with guys on him. He's such a big body that it's hard to take the puck away from and he's got good vision. You see the play he made to Mitchy the other night in that Blue-White scrimmage and even throughout the pre-season and in practice you see it quite a bit. He's an easy guy to play with, easy give and goes, and you know he's going to be at the net and he's going to try and get open."

Ritchie and Marner linked up for a nice goal in Tuesday's pre-season game.

"Mitch is a special player," Keefe noted, "so he develops chemistry quite quickly on his own. He finds ways to adapt his game and find people. He has a pretty strong confidence Nick is going to live around the net and he did on that first goal to get us going there."

Mitchy & Ritchie are at it again 🔥#LeafsForever pic.twitter.com/AL6LpD0ivf

"They're both good players so it was bound to happen eventually," said defenceman Morgan Rielly, "but [the chemistry] seems to have been a bit quicker than expected."

While Spezza and Ritchie were chatting in one golf cart on Wednesday, Marner was getting to know goalie Petr Mrazek in another.

What stood out about the 29-year-old Czech native?

"I don't know what it is with these Euro guys, but they all love golf and they all look like they're great golfers," Marner said with a grin. "How they dress the part, it looks like they're going out there to shoot 60."

Mrazek is also making a fashion statement on the rink these days with a new chrome mask, which features former Leaf goalie Jiri Crha, who played 69 games for the franchise from 1979 to 1981.

"I just talked to Jiri, he called me this morning on the way to practice," Mrazek revealed. "He found out about the mask. I had a good chat with him. He was really excited about that and he lives in Florida right now so when we play Florida we will meet."

The Leafs will open the season in front of a full house at Scotiabank Arena. The Ontario government announced on Friday that capacity limits will be lifted in some settings where proof of vaccination is required, including spectator areas of facilities for sports.

"Throughout the process of re-opening our venues to fans, which included working closely with the Province over many months, health and safety has been our shared top priority and we are overjoyed to see this day arrive when we are able to welcome a full venue to cheer on the Maple Leafs and Raptors," said Michael Friisdahl, president and CEO of Maple Leaf Sports & Entertainment, in a statement. "We are grateful to all levels of government for their partnership in this process and we recognize there will continue to be much work to do together to ensure the safest environment possible for every event attendee and our community. Today, though, is an exciting day for our teams, our fans and our community and we look forward to a safe and enjoyable season."

Capacity had previously been capped at 50 per cent. The Leafs played in front of 10,000 fans in each of their two pre-season games this year.

William Nylander missed the team-bonding trip, because he's not yet fully vaccinated, but he will play on Saturday night.