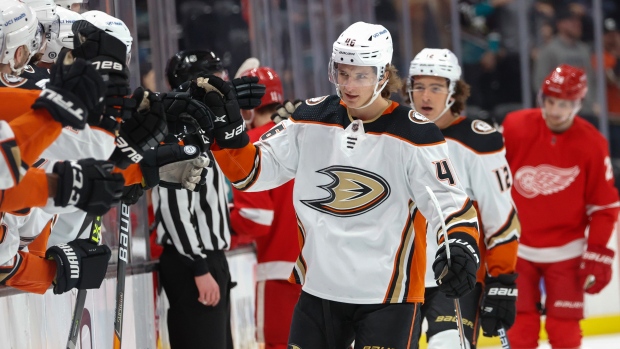 The Maple Leafs (optional) and Anaheim Ducks skated at Scotiabank Arena on Wednesday.

During the 2021 World Juniors, Auston Matthews took to Twitter to praise Trevor Zegras, who would go on to be named tournament MVP while leading Team USA to a gold medal. The Leafs centre continues to be impressed by the 20-year-old Ducks dynamo.

zegras niceeeeee with it 🇺🇸😤

Zegras, meanwhile, appreciates the swagger that Matthews brings to the ice.

"He's got a lot of confidence with the puck and is very confident in the plays he can make," Zegras observed. "When he gets in those scoring areas, he really doesn't miss. We've done a ton of video on him today."

Matthews scored in Toronto's 5-1 win at Anaheim in November. Zegras fired a season-high eight shots on net that night but was held off the scoresheet in his first showdown with Matthews.

"He's an unbelievable player and a guy I watched a lot growing up, so it's definitely cool going up against him," Zegras said.

Matthews leads the Leafs with 25 goals in 35 games but has failed to score in the past two outings. He hasn't gone three straight games without a goal since Nov. 18-21, 2021.

"They have a lot of young guys with skill that can make plays," Matthews said of the Ducks. "Those guys have really added jump in their lineup and some offensive creativity. They're an explosive team."

Matthews has provided plenty of highlight-reel moments this season, but Zegras may have authored the play of the year with his flip pass – aka "The Michigan Assist" – on a goal by Sonny Milano on Dec. 7 in Buffalo.

"A lot of stuff's got to work out there for it to go like it did, and they pulled it off," Matthews said. "That's going to be a highlight that people are watching for a long time."

Even though Zegras didn't get named to the Pacific Division All-Star team, he's been invited to Las Vegas next month to take part in the Breakaway Challenge during the skills competition. He has asked followers on Twitter to share their thoughts on moves he could try.

"I got a bunch of ideas now," Zegras said with a smile. "I appreciate everybody chiming in. Definitely some funny comments and helped me get some ideas for sure."

Some suggestions have already been ruled out, including a proposal to honour Ducks captain Ryan Getzlaf.

"Somebody told me to wear a bald cap for Getzy," Zegras said with a chuckle, "so that's definitely not happening. That's a no-go."

Taking notes from 15 and a few legends 🕺

Zegras has been able to put up 30 points, behind only Detroit's Lucas Raymond (33) in the rookie scoring race, because he trusts his creative instincts.

"When I look at a guy like Z, he's a guy that has got all kinds of offensive abilities and he's got the confidence," noted teammate Troy Terry, who will play in his first All-Star Game this year. "He comes right into the league and if he has a turnover or whatever, it doesn't faze him. He knows it's going to work for him more times than not. I was not that way. When it wasn't working right away, I went into a shell."

Terry is certainly out of his shell now. The 24-year-old has figured out the mental side of the game and the offensive production has flowed. Terry is tied for sixth in the Rocket Richard Trophy race with 23 goals.

"This year, when I'm getting into those areas, I've got the confidence and I'm excited to get those chances," he said, "because I'm ready to score."

The Leafs will be playing their first home game in three weeks. Unfortunately, just like the last two games at Scotiabank Arena in early January, there will be no fans in the stands due to pandemic restrictions.

"We're used to it so, honestly, I think it will a lot harder on other teams that have to come to Canada and play in these buildings and aren't used to it," Leafs defenceman Morgan Rielly said.

This will be the first time all season that the Ducks have played in an empty building.

"It might be a little different, but it's something both teams have to play through," said Anaheim assistant coach Mike Stothers, who is running the bench while head coach Dallas Eakins is in COVID protocol. "We'll see how it goes, but it's Toronto. Everybody gets up to play Toronto."

"It might be a little weird at the start," said Ducks defenceman Jamie Drysdale. "For me, once you get dialled into the game you can block everything out unless they're cheering for you and then you use it as energy."

Drysdale, who enjoyed a home-cooked meal with his family on Tuesday night, will be playing his first NHL game in his hometown.

Growing up as a Leafs fan, Drysdale kept a close eye on Rielly.

"I watched a lot of the Leafs growing up," the Toronto native said with a grin. "There's no hiding that. Growing up here it was all about the Leafs. I definitely gravitated to his game and how he moves around the ice, how he controls the play, so definitely a guy I watched a lot of and learnt a lot from."

Stothers coached Rielly in Moose Jaw in the Western Hockey League and sees plenty of similarities between him and Drysdale.

"They're both creative," he said. "They are both willing to take some risks to contribute offensively and ... if there's an error or mistake made, they're usually quick enough to recover and get back and help out. If Drys picked Morgs as his favourite player or someone he wants to model his game after, I think good on Drys. I don't think there can be anybody better, both on or off the ice, than Morgan Rielly. I loved having him. I still love watching him play. I probably will be cringing when I see him get the puck and skating up the ice tonight, but I don't think Drys can do any better than having Morgs as a role model."

The Leafs will be experimenting with a new forward alignment, which features Matthews, Mitch Marner and William Nylander on different lines. There's another way of looking at this balanced approach, however.

With the Leafs stumbling a bit during the recent six-game stretch on the road, Keefe turned to the line of Kampf between Mikheyev and Engvall to set the tone.

"Those guys have really established play for us," Keefe said. "We've started them in each game and each period, because they've gone out and established our game for us."

Kampf, a defensive-minded centre who often gets fed a steady diet of defensive-zone starts, now finds himself between Alex Kerfoot and Nylander.

"You'll see me move things around to ensure he's still getting the D-zone starts that I like him to have," Keefe said. "At times he'll come off that line when there's O-zone faceoffs and things of that nature. He's a valuable player for us no matter where we've had him in the lineup or who he's played with, especially games where we've had the lead, because we trust him."

The coach also stressed that Kampf, who has gone seven games without a point, can help a top scorer like Nylander, who has 38 points in 38 games.

"Kampf's done a lot of good things," Keefe said. "He's underrated with his ability to move the puck up the ice and make plays and distribute the puck to his wingers."

"The progress has been steady," said Keefe. "Despite the fact he was in a red [no-contact] jersey yesterday, he really got through the entire practice and did a little bit more than we even thought that he would. He'll have his neuro psych test today, which will determine his status going forward. The progress has been very good. He's been feeling good, but just has to go through the necessary steps to be cleared to go full contact and prepare to play."