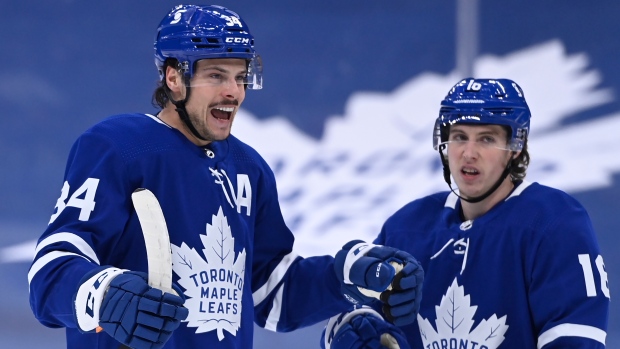 TSN Toronto Reporter Mark Masters reports on the Maple Leafs, who practised at Ford Performance Centre on Sunday before travelling to Montreal.

Toronto's dynamic duo continues to lead the way as the Leafs close in on their first division title since the 1999-2000 season.

"You could look back to the stone age and see chemistry between those two," said defenceman Travis Dermott. "When they're buzzing like they are it's easy for our team to get going."

On Saturday, the Leafs fell behind early and looked sluggish against the Vancouver Canucks. Then, late in the first period, Toronto's top line turned a defensive-zone draw into a goal in the blink of an eye.

Matthews won the face-off back to T.J. Brodie, who flipped the puck to Marner, who hustled through the neutral zone gaining the offensive blue line with speed and chipping the puck to the perfect spot below the goal line. Nick Foligno got there first on the forecheck and played the puck to the other side of the net where Marner had arrived. Marner quickly put the puck in front to Matthews, who backed up to create just enough space to get a shot off.

"There's nights when it seems like they're just on the same page and they don't have to look," Brodie marvelled, "they just know where the other guy is."

Sheldon Keefe paired Matthews and Marner together midway through last season and has kept them together this entire year.

"Over time, I think that pays off and we are seeing that in terms of their ability to find each other and use each other's strengths very well to create a nice combination for us," the coach noted.

Matthews (49) and Marner (48) sit second and third in even-strength points this season behind only Edmonton's Connor McDavid (56).

"He's done an amazing job in the O-zone of getting himself open," Marner said. "He can shoot the puck from really wherever in his stance. That's something that he works on a lot."
Marner (33) trails only McDavid (41) in primary assists.

"I don't know if he gets enough credit with what he's been doing this year and the kind of player that he is," Matthews said. "He's just a blast to play with and I think we both complement each other well."

An elite goal scorer with a dynamic playmaker, it's a tale as old as time. A match made in hockey heaven. But teammates are quick to point out this pair is about much more than pretty plays.

"They're just really complete players, 200-foot players," said captain John Tavares, "hard to play against, very good defensively and that leads to so much offence."

"They continue to feed off each other," Tavares observed.

"They both have the team in mind in all the plays they make," said goalie Jack Campbell. "They are coming back in the D zone making great plays and it leads to those highlight-reel plays you see on the TV every night."

Keefe has leaned heavily on the pair of 23-year-olds this season. Marner averages 22 minutes and 22 seconds of ice time per game, which is third among NHL forwards, while Matthews is fifth at 21 minutes and 41 seconds.

But on Saturday both registered their lowest time-on-ice totals of the season. Marner played 17 minutes and 37 seconds while Matthews finished with 15 minutes and 52 seconds in the 5-1 win.

Keefe confirmed he is planning to spread the minutes around a bit down the stretch.

"Last night, that was something I was trying to be conscious of," the coach explained. "Trying to build up the confidence of our third and fourth lines and putting them in different situations we might need them in. The pace and physicality of the playoffs are going to require those guys to play a little more and certainly play against better players at different times."

Toronto will play three straight against Montreal this week before wrapping up the regular season with games in Ottawa and Winnipeg. The Leafs do not have any back-to-back sets remaining.

"We are also trying to be competitive, win the games, and keep the top guys in their rhythm," Keefe stressed. "We don't want to pull back too much and then you have too far to go to ramp them up when the playoffs begin."

The main reason why former Leafs coach Mike Babcock said he was reluctant to play Matthews and Marner together was because he felt the Leafs benefited more from having each guy drive their own line. So, Matthews played with William Nylander while Marner paired successfully with Tavares.

And early on this season there was some buzz that maybe Keefe should revert to those previous combinations. Toronto's top line, after all, was the only one consistently producing goals in five-on-five play.

Of late, however, Tavares and Nylander have been heating up. Last week, Nylander revealed his linemate made a modification to his stick, which helped spark the offensive explosion.

"I guess Willy's letting out some of my secrets," Tavares said with a smile on Sunday. "I've used the same curve probably since minor hockey so just felt it was time to play around with some things, try something out. I liked something new and just been getting more and more comfortable with it. And then my specs came in with the curve so I got it the way you want your stick to feel."

Tavares has seven goals and 11 assists in 14 games since April 4. He insists the stick isn't as big of a factor as sticking with it.

"More importantly, it's just been building good habits and trusting my ability and staying with it," Tavares said.

The Leafs are undefeated since Foligno completed his quarantine and joined the team.

"He brings a light to the room," said Campbell. "We already had a great locker room and I loved the chemistry with the team, but adding Nick, he's just a leader. There's certain guys that just have it. I don't think it’s a coincidence that once he stepped in the lineup we flipped that switch and started rolling again."

Toronto had gone winless in five straight (0-3-2) before Foligno debuted on the top line in Winnipeg on April 22.

Foligno, who served as the Columbus Blue Jackets captain for the last six seasons, hasn't hesitated to make his voice heard despite being the new guy. He even delivered a speech before his first game.

"He's not afraid to speak up and voice his opinion, which is amazing," said Marner.

With an assist in all four games played with the Leafs, Foligno has helped fill the void with Zach Hyman out with a MCL sprain.

"That goal there, that’s a great forecheck by him," Marner noted of Toronto's opening tally on Saturday. "He's done a lot of great things for us, especially in the D-zone."

"He's such a sound guy," raved Dermott. "You know, just meat and potatoes. He does everything right. His track is perfect. He’s always got a good stick going, finishing his checks."

After taking a puck to the face and leaving Saturday's game in the third period, defenceman Justin Holl was absent from practice.

"He is doing well," Keefe said. "He is uncomfortable today, understandably. He is not going to travel with us. He won't play tomorrow. But we are not expecting him to miss any length of time beyond that."

TW: Holl takes a puck to the face and is badly cut #LeafsForever pic.twitter.com/2gYzIgT05h

"That was just part of the plan," said Keefe. "We didn't need to overwork him today. He will play again tomorrow. We had set it up so that Fred would get an increased number of shots today and [David] Rittich would relieve Campbell when he was done."

Fred being Frederik Andersen, who continues to work his way back from a lower-body injury. Sunday was his third full practice since March 19. There is no timeline for his return to game action.

"No real clarity on it," Keefe said. "Today is a good step for him just in terms of increasing his workload. The plan at this point is that he is not going to travel with us, but we will have another team practice on Wednesday. As they are building up his workload, they are going to try to set up a plan from there."