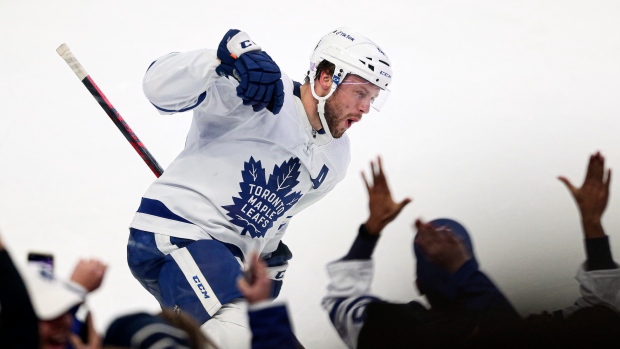 TSN Toronto Reporter Mark Masters reports on the Maple Leafs, who held an optional skate at UBS Arena on Saturday.

With the team's defensive depth being tested, Morgan Rielly is doing his part to step up. He played more than 27 minutes in each of the last two games and wasn't on the ice for an even strength goal against.

"He's a horse for us back there," said coach Sheldon Keefe. "He seems to have no real limit to what he can do ... He is intelligent about it. He doesn't over stretch his shifts. He knows when to change. When he gets in tough spots, he seems to have another gear to push through and use his legs to get out of trouble."

Rielly is averaging 24 minutes and 12 seconds of ice time per game this season, which is up 35 seconds from last year. He's averaging almost 26 minutes during the last five games. And now, with second-pair defencemen Jake Muzzin (concussion) and Justin Holl (recovering from COVID) sidelined, the Leafs are leaning on Rielly even more.

"The defensive piece in particular is where he's taken the biggest strides," Keefe said. "The responsibilities taken with match-ups and penalty killing and late in games and all those things, that's allowed him now to be a guy who can take on more minutes."

The 27-year-old from Vancouver has carved out a penalty-killing role this season. He's averaging two minutes shorthanded per game.

"It's not too much of an adjustment, really," Rielly said earlier this month. "As a player, you want to be out there as much as you can. With the PK, that is an area of the game that is played with a lot of structure so, as long as you're paying attention in meetings, you can typically go out there and be able to figure it out. For me, it's been fun. It's a new challenge, which I enjoy."

"We've been really happy with Morgan in terms of how he's continued to get better as he's gotten older and really figuring out what it is to be a top defenceman," Keefe said.

"It starts with gap control," said Keefe, "and then just closing in the defensive zone and taking away space. His box outs at the net, tying up sticks, just things of that nature, he's just a lot harder guy to play against in that way."

Keefe also highlighted the fact that Rielly has continued to produce offensively with 31 points, which is 20 more than the next closest Leafs defenceman (T.J. Brodie and Jake Muzzin each have 11 points).

Rielly, an alternate captain and the longest-serving Leaf, also continues to be an important voice on and off the ice.

"For me, being up the whole year now, I've noticed just how good of a leader he is the locker room," said 22-year-old defenceman Timothy Liljegren. "He just takes times to talk to everybody and asks questions about your life, your personal life, and stuff like that. He takes time to talk to younger guys like me."

Rielly's leadership will be important now as the Leafs look to snap out of a bit of a funk. They are 2-2-1 during this tricky five game road swing and got blasted by Keefe for a "soft and purposeless" performance over the final 40 minutes of Wednesday's loss to the New York Rangers.

The Leafs aren't shying away from the "soft" description.

"We were a little bit too soft, to be honest," said winger Pierre Engvall echoing his coach. "We want to bounce back right away today. When we play hard and we don't cheat in a game, we're a really good team."

"I'm looking for our team to respond tonight," said Keefe. "It's not going to be an easy night from a competitive standpoint. This team's going to make it hard."

The Islanders have won six of seven games, including a 4-0 shutout of the Arizona Coyotes on Friday night.

The Leafs are looking to tighten up defensively, especially in front of their net.

"We've done that really well throughout the season," said Keefe. "It's a real foundational piece of our defending. When we're at our best we're really strong in that area. We will be put to the test with that tonight. The Islanders get the puck there in a hurry."

It's been a quiet stretch for Toronto's second line. John Tavares and William Nylander each have just one five-on-five goal over the last five games. Tavares is minus-five over those games while Nylander is minus-three.

"They have done a good job of consistently generating offence and chances," Keefe said. "I don't think the line has had the same type of rhythm that they had prior to Christmas. I think they have another level to get to."

Initially, Keefe said he felt no one played well on Wednesday, but after a review of the film he changed his assessment.

"I thought the [David] Kampf line had a really strong game from start to finish with the exception of a couple of shifts that were tough on us," Keefe said. "That line was really strong. Save for that, I thought our other three lines could've been a lot better — the Tavares line and the [Auston] Matthews line just the same."

Asked for an example of the team's "purposeless" play on Wednesday night, Keefe put the spotlight on his fourth line of Kyle Clifford, Jason Spezza and Wayne Simmonds.

"We were in the neural zone. We were up 3-1 in the second period. The fourth line was on the ice. We turned it over in the neutral zone instead of getting it in and establishing a forecheck. In turn, their fourth line comes to life, gets on the forecheck, wins a puck back and scores a huge goal. You have one fourth line that goes out with a ton of purpose. Ours didn't have the same. It ended up turning the hockey game."

Keefe will make a change to that unit tonight as Joey Anderson draws in replacing Clifford.

Toronto's depth will certainly be challenged against an Islanders team that likes to roll four lines. In fact, New York's fourth line of Matt Martin, Casey Cizikas and Cal Clutterbuck is known as the team's "Identity Line" and all three players average more than 11 minutes of ice time per game.

"We talked about the play of the fourth line of the Islanders," said Keefe. "It is a big part of their team and a big part of the game against the Rangers the other night. We need to get more out of that [fourth] line as well. That is part of us just being hard to play against: shift over shift, having everybody involved."

Spezza has gone six straight games without a point, which matches his longest drought of the season. He is minus-four in that stretch. Simmonds has been a minus player in five of the last six games.

Matthews saw his road goal streak come to an end on Wednesday. The Arizona native nearly tied the NHL record of 11 straight road games with a goal, shared by Steve Yzerman and Pavel Bure, but a third-period tally was wiped out after officials ruled he used a distinct kicking motion to direct the puck in.

"I thought it was a goal," linemate Michael Bunting said. "The refs thought otherwise and that's their job and they made that call. That was unfortunate, because he would've [set] a record with that goal. I was pretty excited for him. But that's not going to change his game. He's going to come back out and keep scoring like he always does. It's just unfortunate how that went."

Auston Matthews has his goal called back for a kicking motion. pic.twitter.com/QsuygKqzbS

Matthews finished with two shots on net, which equalled his season low. But he did pick up an assist on Bunting's first-period goal, which extended his road point streak to 11 games. Matthews can match Doug Gilmour, who got on the scoresheet in 12 straight road games during the 1993-94 season, for the longest streak in Leafs history should he get on the board tonight.

Matthews hasn't been held off the scoresheet in a road game since ... he last visited UBS Arena to face the Islanders on Nov. 21, 2021.

Leafs lines for Saturday's game at the Islanders: