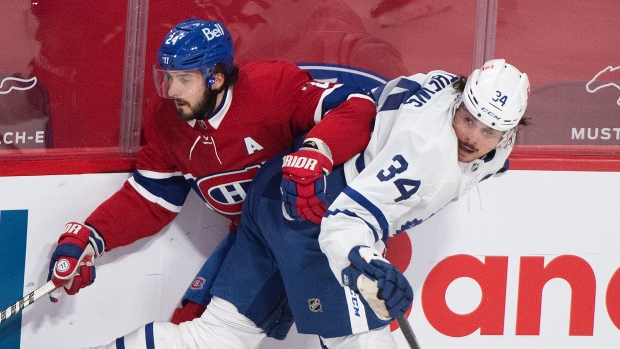 Sheldon Keefe isn’t going to try and get Auston Matthews away from the Phillip Danault line tonight, despite owning the last-change advantage.

"First of all, I don't feel the need to protect Auston from anybody," the Leafs coach said. "He and Mitch [Marner], they need to take on the most difficult matchups. That's important for our team, especially when you look at Danault with [Brendan] Gallagher and [Tomas] Tatar. That's been as good a line as there is in the league the last few years. We have to respect that line. Auston and [Zach] Hyman and Mitch, those are three players that we like to take on those matchups. They've found a way to succeed in those matchups ... I'm not going to be hiding our best people from anyone."

Matthews hit the scoresheet in all 10 games against the Canadiens this season, finishing with seven goals and seven assists. But the score only favoured the Leafs 3-2 when Matthews and Danault shared the ice in five-on-five play. The shot attempts actually favoured the Habs in those 73 minutes and 45 seconds.

"It's a little harsh to call us the shutdown line," said Tatar. "I mean, we're trying to create as much offence as we possibly can [while] being structured and ready to play on the defensive side."

Montreal's top trio has all experienced injury issues of late. Gallagher is returning from a broken right thumb and only played in four games against the Leafs this season. Danault missed time late in the year with a concussion.

Tatar, meanwhile, missed five of the past nine games due to a nagging lower-body injury.

"Now he's 100 per cent and getting back with Phil and Gally, we know what they can do and we expect them to be at their best, bringing a lot of momentum to our team," said Canadiens coach Dominique Ducharme.

Montreal has been off for more than a week and the rest has been hugely important.

"You can't even imagine," said Tatar. "To be quite honest, I didn't feel the best at the end. I was really looking for that break there ... I think it's going to give me a lot of confidence. The body just feels good."

John Tavares is embracing the pressure facing the Leafs.

Keefe believes that Tavares' even-keel nature is helping set the tone for his team.

"At this time of year where emotions can be both high and low, having a leader like him with his mindset and his approach, I think, helps level off those emotions," the coach noted.

Tavares is playing in his 12th NHL season and has only escaped the first round of the playoffs once. But he's never entered a series as a division champion, which makes things a bit simpler.

"We can really just stick to who we are and our game and really trust that because of the consistency we've built, the identity we’ve built as a group and individually," Tavares said.

There will be no fans in the stands tonight, but the Leafs are still feeling the love.

"Knowing how dedicated the Leafs fans have been and how much support we get in this city, we definitely hold that and carry them with us even though they're not going to be in the building," said Toronto native Jason Spezza. "We know we're playing for the fans."

"A lot of people have been reaching out," said Tavares, another local product. "They're just excited and just really enjoyed the season especially as we got to the last few weeks [with] where things kind of stood and things heating up. We know Leafs Nation is excited. We haven't been able to have them up close and personal, but we've felt them from afar and we're looking forward to playing hard for them."

The Leafs wrapped up the regular season last Friday in Winnipeg. Since then they’ve held three full practices and enjoyed two days off.

"The guys are just ready to play," said Keefe. "It's dragged on here the last couple of days. You're starting to watch the other series on TV and things like that and you really just want your chance to compete. We'll get that tonight. I know our guys are anxious."

That said, the practice time has been valuable.

"We kept the focus a lot on ourselves and our game and the things that we need to do really well to succeed in the playoffs, not just necessarily against one particular opponent, but just the playoffs in general," said Keefe. "The games change just a little bit ... a lot harder to get to the net, a lot harder to generate shots and opportunities to score. We worked on little things like that. And then just going through our structure and cleaning things up there.

"It's been a really long time since you had three practices before you've played a game. We just touched up some of our details and then you have little things along the way that are specific to your opponent. We addressed one or two things each day and then had our real final preparations yesterday. We really wanted to make today, as much as we could, just to be a regular game-day routine for our guys in terms of meetings and preparation."

Keefe confirmed that defenceman Zach Bogosian, sidelined for the last month with a shoulder injury, will dress tonight.

Toronto will have seven new players (bolded below) in the lineup tonight that they didn’t have in Game 1 of the series against Columbus last summer. The Leafs will also have a new starting goalie in Jack Campbell.

Leafs Game 1 lineup versus Canadiens in 2021: